The next hike will be on Saturday, 26th June.
We meet at the Ballpark in Gillies Bay at 10:00am
My photo this week is one I took last Tuesday when visiting biologists were doing a survey of the turtle population of Turtle Lake. Most of the turtles that live in some of our lakes are the native Western Painted Turtle, but there are a few others that are non-native and probably were store bought specimens. Now that the native species have been declared to be at risk due to habitat loss or other factors there is a need to determine how large or small the population is and what if any measures might be taken to conserve this reptile. I have a few photos of turtles on Texada, but this was a chance to photograph some being hand held and worked on by experts. Close up and out of the water they are much more interesting and certainly quite handsome. It would be a great shame if this animal were to be lost from our island through neglect. However, there are some things that are fairly easy to do that can do much to improve the survival chances of wild turtles and the biologists already have some ideas for habitat improvements on Texada.
JD. 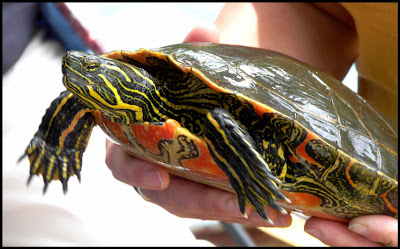 A female Western Painted Turtle from Turtle Lake. She now has a couple of nicks in the edge of her shell so that she can be identified in the future.
Posted by Gillies Bay at 12:46 AM No comments: 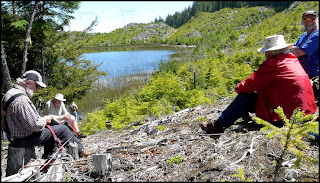 The next hike will be on Saturday, 19th June.
We meet at the Ballpark in Gillies Bay at 10:00am.

Last week we had quite a nice day for our hike which started from the gravel pit part way down the hill on the road to Hydro East. The route climbed up through the welcome shade of the forest for much of the time until we eventually came out onto the open Hydro right of way not far below the highest point. Lunch was in a narrow cleared strip just above a pretty beaver pond.
JD. 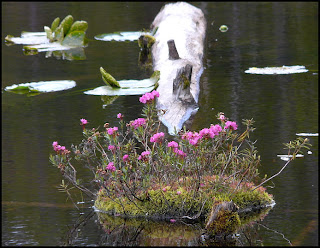 The next hike will be on Saturday, 12th June.
We meet at the Ballpark in Gillies Bay at 10:00am

Last week we had a lovely sunny day for hiking and headed up to the high ground south of Bobs Lake. Walking along the gasline, old logging roads and the Anderson Bay road for a while took us to the Angel Lake picnic spot for lunch.

My photo is of a neat bush of bog laurel in bloom in the middle of a shallow beaver pond. This Kalmia species is fairly common from Alaska south to California often giving the margins of swamps a lovely splash of bright pink colour in June.

The next hike will be on Saturday, 5th June.
We meet at the Ballpark in Gillies Bay at 10:00am.


Last Saturday turned out cool, rainy, misty and dull and we hiked along some wet logging roads past dripping trees and sat down for lunch on wet logs in a forest clearing without a view. Lets hope the weather is a good deal better this Saturday.
JD.