Next Hike - change of meeting place.

This weekend the Gillies Bay Ballpark is being used for the annual blues musical concerts so we will meet instead at the Gillies Bay old school / library parking lot.
JD.

On a recent hike the Trekkers fearless leader is seen crossing a tricky patch of muddy wetland at Other Lake.
Posted by Gillies Bay at 3:03 PM No comments:

The next hike will be on Saturday, 27th July.
We meet at the Ballpark in Gillies Bay at 10:00am.
Last week the group was small enough to fit everyone into a single vehicle.  There was interest in getting back to the starting point at the Ballpark at around 2:00pm so I decided we should make use of the impressive new forest trail at Shingle Beach in the morning and then after lunch take a short tour of the campground.  As it happened we ran into a problem with fallen trees blocking part of the trail and it took us quite some time to circumvent the problem and find our way back onto the proper flagged route.  We ate  a late lunch on a grassy bluff overlooking the sea and missed seeing the rest of the campground.
An important feature of the new trail which starts on the left just before you reach the new welcome sign at the entrance to the campground are the many very large old growth trees in that part of the forest. Just a word of warning for less able hikers because there are several parts of the trail where the route runs along fallen tree trunks and up and down some steep banks without steps. Ropes have been provided in a few places.
My photo this week is of the giant Western Red Cedar tree on the northern part of the trail, but there are also quite a number of giant old growth Douglas Fir towards the southern end at the upper campground sites.
JD. 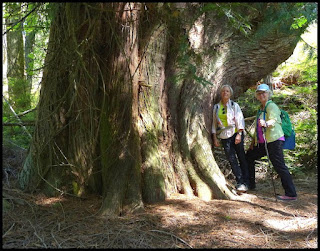 The massive base of perhaps the biggest and oldest Western Red Cedar tree on Texada?  An ancient giant on the new trail at Shingle Beach
Posted by Gillies Bay at 10:05 PM No comments:

The next hike will be on Saturday, 20th July.
We meet at the Ballpark in Gillies Bay at 10:00am.
Last week with just a small group of hikers we drove up to the High Road with perfect warm sunny hiking weather and headed for the bluff at the top of the George Lechner Memorial Trail.  The first part of the route is along a section of old logging road covered with long coarse grasses dotted with the ubiquitous Ox-eye Daisy.  In one small area a few individuals of a group of common North American butterflies called Crescents, and in this case the Mylitta Crescent or Phyciodes mylitta, were busy feeding on the vivid white flowers.
This Saturday the hike will end in good time for hikers to visit a couple of lovely private gardens in Gillies Bay that will be open to visitors from 2:00pm to 4:00pm.
JD. 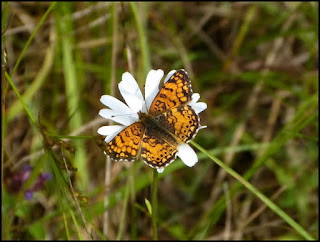 With the Ox-eye Daisy flowers in full bloom near the High Road the Mylitta Crescent butterflies had many to visit.
Posted by Gillies Bay at 11:27 PM No comments:

The next hike will be on Saturday, 13th July.
We meet at the Ballpark in Gillies Bay at 10:00am.
Last week turned out to be another damp day something that has been happening a little more often than is usual in the month of July. I was not able to do the hike which I understand this time did not reward the participants with wonderful views of the sea and distant mountains. However, I'm told everyone did enjoy the forest walk and I must say I always find the peaceful beaver pond a nice spot to visit along the way even on a misty day.
JD. 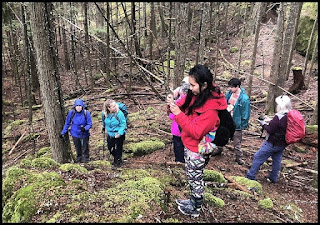 Mt. Davies Hike with the hikers on the trail through the forest well dressed for the showery day. [Terry Hollo photo]
Posted by Gillies Bay at 10:54 PM No comments:

The next hike will be on Saturday, 6th July.
We meet at the Ballpark in Gillies Bay at 10:00am.
Last week we drove along the High Road turning off onto the Pocahontas Bay road and parked at the old Fire Lookout trailhead. Our destination was the Pocahontas East viewpoint where a BC Hydro microwave reflector looks like a big screen for an outdoor movie theatre. The long distance visibility was not all that great, but more than once we have hiked to this viewpoint for lunch and found ourselves in fog most of the time!
My photo this week is of a frog resting in a shallow puddle on the trail. This individual  is a good example of the "brown morph" of the common Pacific Tree Frog which also has very bright green versions.  For a long time I have wondered about these distinctly different colourations and now I see from a Wikipedia web site that there is an interesting explanation.

These frogs have the ability to change color from brown to green. Previously, adults were thought to occur in two different fixed colors. Now, some of them have been found to be able to change between the two. They can also change from lighter to darker, shift from patterned markings to pure colors and vice versa, and even display combinations of colors, brown/green being the most frequent.

It goes on to explain that the changes sometimes happen within a few hours, but more often it's a much slower process taking weeks even months. A chameleon frog?
JD. 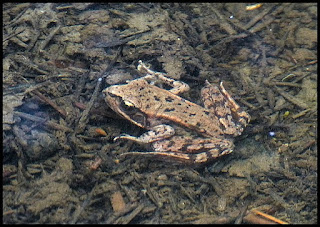 A brown Pacific Tree Frog resting in a shallow puddle on the trail to Pocahontas East viewpoint.
Posted by Gillies Bay at 12:22 AM No comments: