The next hike will be on Saturday, 1st December.
We meet at the Ballpark in Gillies Bay at 10:00am.
Last week the morning was cool and damp, but there was not much wind and we decided to explore a bluff we had first visited last year.  We had done a little work then on the trail which follows an old logging road, but did not reach the far end for lack of time.  This time we had a chance to go a bit further and found we had a higher ridge on our right that looked as if there might be a good viewpoint on top of it.  It was steep after we left the road, but to everyone's delight when we reached the very top the morning's fog had lifted and we had a great view to the west.  Eating lunch was a pleasure as the sun was warming both us and the mossy slope of the ridge, making faint rising clouds of steam full of tiny insects sparkle in the sun light.
On our return route after lunch we flagged a much better way of reaching the new viewpoint that avoided the very steep climb to the new viewpoint at the northern end of the ridge.
JD. 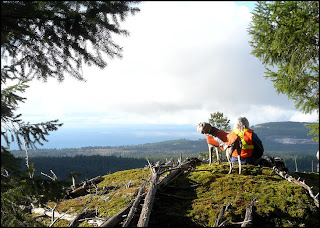 The view west from Pocahontas Bluffs with Vancouver Island faintly visible in the far distance.
Posted by Gillies Bay at 11:26 AM No comments:

The next hike will be on Saturday, 24th November.
We meet at the Ballpark in Gillies Bay at 10:00am.

Last week we had rainy weather for the start of the hike, but it dried up at lunch time. We parked near Second Lake and hiked up past the Reactor Station on the Vancvouver Island Hydro line, but backtracked when we found ourselves in fog with a nasty cold wind blowing up the hillside from Davie Bay. This time it looks as if we will have quite nice weather for a change.
JD.
Posted by Gillies Bay at 3:08 PM No comments:

The next hike will be on 17th November, 2012.
We meet at the Ballpark in Gillies Bay at 10:00am.
Last week we were very lucky to have a bright sunny day, the last of three days that I think were very much nicer than the days before and after the brief dry spell.  We met in Van Anda for a change and with a larger than usual turnout car-pooled over to James Mack's property on the west side of the island.  Taking the main trail south we headed uphill past the turnoff to Favada Point and then only the short distance beyond to the trail that runs downhill to Cabin Cove. Turning left not far from the beach we enjoyed the view of Cabin Cove from the bluffs as we followed the long winding trail past Arbutus Arch and on towards Big Beach.  The lunch spot on the grassy slope just above the beach is one of the few places where our trails give the hiker a good view of quite a long stretch of coastline.  It really is very rugged with continuous high and low cliffs that are quite unbroken by the slightest beach between Cabin Cove and Big Beach.
For our return route we headed uphill to the very start of the Big BeachTrail and then north on the old logging road back to our starting point.  I was pleased to see a few sealions out on the outer side of the isalnds near Maple Bay and hope to see many more showing up in the New Year.
JD. 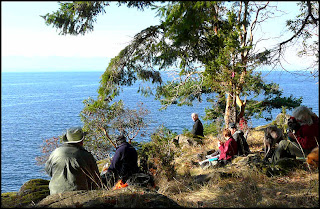 Lunch in the bright sun on the low cliff above Big Beach.
Last week I had some problems with sending out the hike emails and a few people failed to get theirs.   You can always view earlier hike notices and photos on the Texada Trekkers web site here:—
http://texadatrekkers.blogspot.ca/
Sometimes clicking on the old photos will bring them up to full size.
Posted by Gillies Bay at 1:00 AM No comments:

Next hike from Van Anda

The next hike will be on Saturday, 10th November.
This week we will meet at 10:00am in the parking lot at the Canadian Legion in Van Anda
Last week we had another rainy day for our hike and while the rain was never very heavy it did pretty well keep up the whole time we were hiking. We drove to the start of the Mt. Pocahontas trail a short distance down the Pocahontas Bay Road.  This year has been a poor one so far for mushrooms and it was odd to be hiking along this forested route with hardly a single fungus to be seen anywhere, and yet water has been falling from the sky for several weeks and one would think the underground parts of the fungi, the mycelium, would be well watered by now.  We climbed steadily higher along the winding road, past the side trail to the peak where the fire lookout hut used to be and only then began to spot the odd golden yellow fungus pushing through the mossy forest floor.  This is the choice Chanterelle of which there are a number of varieties and species but Cantharellus cibarius seems to be the most common one. We finally reached the lunch spot, a grassy bluff overlooking Malaspina Strait which was to our surprise visible even with mist and rain cloud all around and above us.
JD. 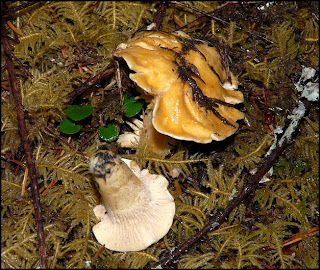 Golden chanterelles on the mossy forest floor on Mt. Pocahontas.
Posted by Gillies Bay at 12:22 AM No comments:

The next hike will be on Saturday, 3rd November.
We meet at the Ballpark in Gillies Bay at 10:00am.
Last week the rain continued on and off all week with rain still falling when we met for the hike in Gillies Bay.  From past experience we knew conditions for off-road hiking would be miserable so it was decided to stick to the good logging roads this time and sharing two vehicles we headed down past Davie Bay and parked not far past Stromberg Creek bridge.  For lunch we made good use of one of the rustic structures built for the annual Diversity Music Festival.  To give us comfortable seating we manhandled a wood picnic table up from the beach while one hiker found a wide shelf tucked up under the roof a more satisfactory perch.  Looking out past the trees we could see the Sabine Channel was covered in white caps driven by a strong south-easter so it was nice to be out of the rain and the wind as well.
The rain had eased off by the time we started back up the road to the vehicles and the hike turned out to be quite a pleasant one in the end.
JD. 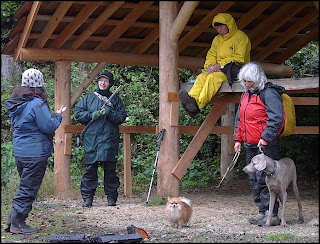 Hikers sheltering from the rain at Shingle Beach Campground.
Posted by Gillies Bay at 4:10 PM No comments: