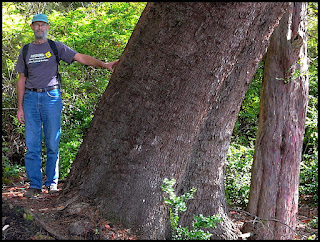 The next hike will be on Saturday, 2nd April.
We meet at the Ballpark in Gillies Bay at 10:00am.

Last week we had perfect hiking weather for a change and headed down towards Shingle Beach. The plan was to walk north along the coastline following the route of a new hiking trail and parked some distance before the entrance to the campground. Some sections of the trail are very steep and work is in progress creating easier routes to bypass the difficult parts. The grassy bluffs along this new route are among the finest on Texada having this trail opened up is going to make it possible for hikers to visit them, someting that was simply not possible before.

Part way along is Yewtree Bay, formerly the location of a squatters cabin, but this structure is no longer standing and the remains are a mess. It's still worth a visit because there are wonderful specimens of the common Arbutus as well as the very much less common Western Yew. My photo this week was taken a while ago and shows the lower trunk of one of the larger yew trees growing next to one of the very large old Arbutus trees not far north of Yewtree Bay..
JD.
Posted by Gillies Bay at 10:54 PM 3 comments:

The next hike will be on Saturday, 26th March.
We meet at the Ballpark in Gillies Bay at 10:00am.
Last week we drove about halfway down the long hill on the Hydro East road and parked just before a fork in the road.  The side road on the left  heads down through some recent clearcut areas and eventually joins up with a low level road running north from Hydro East.  These logging roads, some new and some much older, all offer good walking surfaces although with some steep gradients in places.  After walking towards the north for a fair distance a narrow track branches off and runs very steeply down to the beach where some brush pickers from the mainland have a secluded camping spot close to a nice little stream. The tide was lower than usual and it was pleasant to walk along the beach to a couple of rocky headlands that offered pleasant lunch spots.
Just a brief reminder about the second Saturday in April when the Texada Trekkers have their annual potluck on the beach at Raven Bay.  This is open to any hikers, past or present, who would like to participate and offers for active hikers a one way trek in the morning starting from the Canadian Legion in Van Anda at 10:00am.  Please contact David Taylor or Russ Sparks for more info on the days activities, food, drinks and transport arrangements etc. Offers of help of any kind are welcome.   I will be off island that weekend enjoing my annual wild goose chase on the lovely and sometimes cold wet and windy beaches of Vancouver Island.
JD. 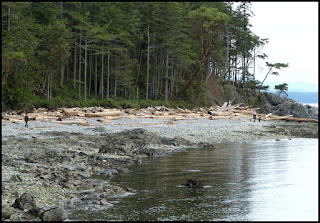 The rocky beach north of Hydro East, our lunch spot last week.
Posted by Gillies Bay at 10:36 AM No comments:

The next hike will be on Saturday, 19th March.
We meet at the Ballpark in Gillies Bay at 10:00am.
Last week we thought we would have quite a nice day for hiking, and it was not too bad, but the sun was hidden behind clouds that became darker as the day progressed.  We headed for the high ground and did the Mt. Davies hike starting from the parking spot on the gas pipeline just south of the Vancouver Island Hydro lines on the Bobs Lake Rd.  The top of the mountain where we had lunch was not in the clouds, but the view was not quite as impressive as it might have been on a really clear day.  Just as we packed up to start down from the top a few large flakes of snow began to fall as a reminder winter is not quite over yet.
My photo was taken on a hike I did earlier this week on the slopes of Surprise Mountain on a day that was both warm and sunny.  I was lucky enough to get photos of an Aligator Lizard that was taking advantage of the bright sunshine and had chosen a patch of bare rock on a small mossy bluff to warm its body.
I have a pair of soft odd style dark gloves that someone seems to have left behind in a vehicle on a recent hike.  The have an opening for the fingers instead of the usual five fingers, so quite unusual.
JD. 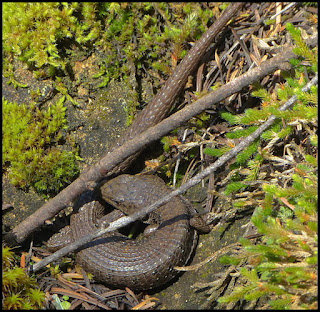 An Aligator Lizard in the sun warming itself on a patch of bare rock near Favada Point.
Posted by Gillies Bay at 12:19 AM No comments: 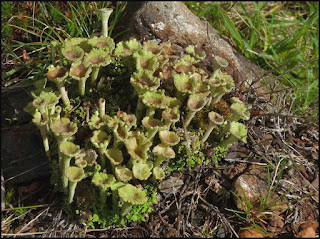 The next hike will be on Saturday, 12th March.
We meet at the Ball park in Gillies Bay at 10:00am.

Last week we drove south only part way to Davie Bay and parked on the side of the road some distance before Eagle Creek. We then started walking south along the road before turning off a short distance after crossing Eagle Creek. This is the start of a logging road that runs down to Davie Bay, but we only used it to get to the start of a winding trail that runs through clearcut and forest to the top of the low cliffs at the shoreline. After lunch it was decided we should should explore the area to the north of the lunch spot to see if we could make the hike a circular one by crossing Eagle Creek near the sea and getting on to the road that starts at the old cabins. The going was a bit rough in places, but we did make it, crossed the creek OK and eventually reached the Davie Bay road again north of where we had parked the vehicles.

I'm giving advance notice of the annual Texada Trekkers hike and beach pot-luck barbecue at Raven Bay. This year it will be on Saturday, 9th April. I will provide more details next week.
JD.
Posted by Gillies Bay at 12:18 AM No comments:

The next hike will be on Saturday, 5th March.
We meet in the Ballpark at Gillies Bay at 10:00am.
Last week we had a dry day for hiking for a change, but while the rain held off and there was no wind at all there was low cloud or fog above us and no way of knowing how thick it might be.  On hike days like this we simply assume there is some sunshine somewhere high up and set of towards the high ground to find it.  It was fairly clear when we were driving past the Vancouver Island Hydro lines so parked at the next road junction.  Headed south from there along the gasline road we turned off into the forest at the bottom of the very steep hill and made our way to the Bobs Lake Rd,  Then it seemed a good idea to make for Flicker Mt. to get the best view and enjoy lunch at the top.  But we discovered quite soon that the mountain was shrouded in the low cloud so changed plans and headed to Bobs Lake campground instead.
This proved to be a wonderful choice as the lake was looking so beautiful as the fog drifted here and there and sometimes opened up to the sky and allowed the sun to brighten the scene. It was a lovely spot to be for half an hour or so on a still and mild winter day.
JD. 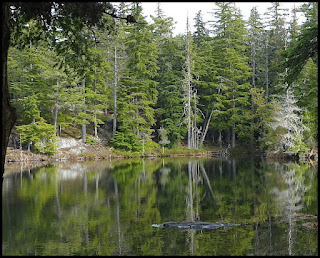 Quiet solitude — Bobs Lake in winter.
Posted by Gillies Bay at 12:31 AM No comments: