The next hike will be on Saturday, 1st October.
We meet at the Ballpark in Gillies Bay at 10:00am.
Last week we had a fairly nice day for hiking, a comfortable temperature with a high overcast that covered just the highest points of land.  We figured the clouds were going to clear before very long and headed for the new high point with a view we discovered recently on the east side of Mt.  Pocahontas.   When we reached the lunchspot we were in thick fog, but like magic a breeze came along and the fog came opened up and reclosed just long enough to let us see the mainland before it closed in again.
The recent rains are having an affect on the underground parts of the mushrooms that fill the soil just about everywhere on the island and we are starting to see a great many fungi fruiting bodies of many different varieties coming out of the ground here and there.  One quite uncommon one is the this fresh specimen of the Cauliflower Mushroom which we came across in the morning. I harvested part of it and enjoyed it as a tasty addition to a couple of meals. I was quite surprised to learn that it is only found in BC in a few locations in our south-west corner of the province although similar species are found in California and some parts of eastern North America.
JD. 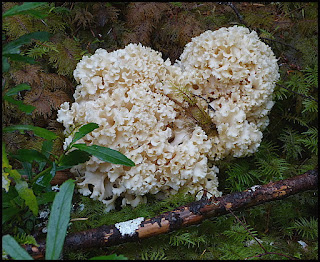 A Cauliflower Mushroom, Sparassis crispa, easy to identify and edible.
Posted by Gillies Bay at 1:38 AM No comments:

The next hike will be on Saturday, 24th September.
We meet at the Ball Park in Gillies Bay at 10:00am.
Last week we had just a small group of hikers and used a single vehicle to drive down to and past Pocahontas Bay to park about a kilometre south of the bay on the old Pocahontas Main haul road.  From there it was pleasant walking south and east on the Main and then on a side road that almost reaches the sea at Water Tower Beach.  The tower is on the mainland where the Lois Lake penstock, the giant water pipe from the dam, reaches the old hydro power station on the shore of Malaspina Strait.
Our native squirrel species is Tamiasciurus duglasii, the Douglas Squirrel.  They mostly eat seeds of coniferous trees such as Douglas Fir and Shore Pine or Jack Pine  (Pinus contorta).  They were only introduced to Texada about thirty-five years ago and have quickly become quite common throughout the island.  They are usually quite difficult to approach being both noisy and nervous about potential dangers so I was happy to find one today close to Angel Lake that was too busy getting seeds from fir cones to bother much about me.
JD. 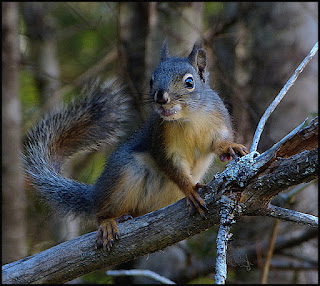 A Douglas Squirrel near Angel Lake.
Posted by Gillies Bay at 12:36 AM No comments: 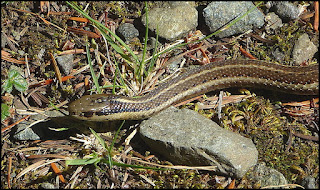 The next hike will be on Saturday, 17th September.
We meet at the Ballpark in Gillies Bay at 10:00am

Last week we drove up to the Hydro Reactor Station road and parked where it is intersected by the gas pipeline right of way. The weather was near perfect for hiking and we set off following the winding roads that hea west mostly under the Hydro lines, up at first then quite steeply down to Thompson Road. Our destination was Mystery Lake which lies on a side road to Thompson and the lunch spot a lovely spot with a small clearing on the banks of the lake at it's north end.

The return to the vehicles followed a shorter route that follows old logging roads on the north side of the power lines. This does have a fairly steep climb through a large clearcut, but after that the terrain is undulating, part open and partly in forest and connects to the gasline not far from where we had parked.

My photo is of one of a couple of Garter Snake that we saw enjoying the warm sunny day very close to the shoreline of the lake.
JD.
Posted by Gillies Bay at 11:51 AM No comments:

The next hike will be on Saturday, 10th September, 2016.
We meet at the Ballpark in Gillies Bay at 10:00am
Last week we drove up to the Masyk Farm turnoff and parked at the roadside gravel pit.  It was pleasant walking along the road towards Pocahontas Bay and then turning off on the next logging road on the right and walking south to the start of the Black Mountain Trail.  Sometimes there are mushrooms in the woods on both sides of the roads and in the forest on the slopes of the mountain, but for whatever reason there were none to be seen this day.  I guess we need more rain and cooler weather to encouage them to appear.
My photo from a recent hike shows some Funnel Spider webs that were crowded together on the roadside near Mt. Grant.  I understand this type of spider is mainly nocturnal and I did not see any about.  The female waits in the funnel for an insect to land or fall on the web and then she rushes out and catches the prey before it gets away.  I think I have seen this type of web now and then in the past, but the unusual thing about these webs was that there were so many that they almost covered a small area of the roadside vegetation.
JD. 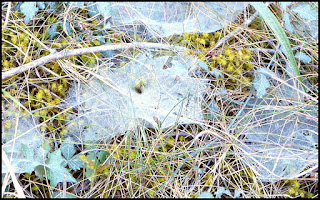 Funnel Spider webs on a roadside.
Posted by Gillies Bay at 12:32 AM No comments:

The next hike will be on Saturday, 3rd of August.
We meet at the Ballpark in Gillies Bay at 10:00am
Last week we had extra strong winds blowing over much of the island and decided to stick to open areas on the hike as much as possible.  That meant the gasline right of way would be OK as well as roads that were extra wide to keep us away from falling branches.  So we headed south past the Hydro Reactor Station junction and parked on the next gasline road crossing.  It was quite pleasant walking south and even climbing one of the steepest section of the line was not too bad in dry conditions.  By lunchtime we had reached Bobs Lake campground and so stopped there for a while.  For the return to the vehicles we used the new shoreline trail instead of the roads to reach the north end of the lake and I found that very interesting as it gives the walker some different and very attractive views of the lake.  When I tried to capture the scene my camera told me I had forgotten to replace the memory chip so I have no new photos of it yet.
I do have a water view for this week, but this is the sea and the location is Anderson Bay which we visited in the recent mid-week hike to the South Texada Provincial Park.
JD. 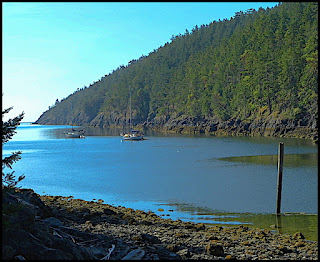 Two sailboats at anchor in quiet Anderson Bay, near the southern tip of Texada Island.
Posted by Gillies Bay at 12:14 AM No comments: