The next hike will be on Saturday, 29th October.
We meet at the Ballpark at Gillies Bay at 10:00am.
A lichen is not just one organism, but a fungus and algae living together to form a new organism. Each of the two kinds of plants do best if they are living together, but each can often survive separately. My photo, which I took on the last midweek hike, is of Cladonia coccifera one species of a group of lichens that are found worldwide in the northern arctic and tundra regions.  A common name for some species of Cladonia is reindeer or caribou moss although they are of course lichens and not mosses.  An interesting feature of these two similar mammal species is that they have microorganisms in their digestive systems that help them digest the lichens that form such an important part of their diet. While lichens tend to be very slow growing, often just a millimetre or two a year, they readily absorb and concentrate atomic radiation which can be harmful to the animals which feed on it.
JD. 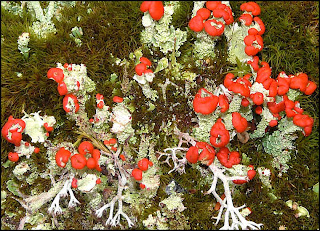 Sometimes called British Soldiers this lichen, Cladonia coccifera, is quite common on Texada.
Posted by Gillies Bay at 10:49 PM No comments:

The next hike will be on Saturday, 22nd October.
We meet at the Ballpark in Gillies Bay at 10:00am.
Last week we headed up to the high ground again to get away from the fog and parked in the old gravel pit near Bobs Lake.  Hiking down the old logging spur through the forest to the south of the pit we found ourselves getting into fog once more as the road dropped in elevation.  But then our trail started to climb and we were soon walking in and out of patches of brilliant sunshine.  After a while our route took us along quite a long open stretch of the Anderson Bay road with interesting wetland and beaver ponds on our left, turning off eventually and along the short side road to our lunch spot beside Angel Lake. This is quite a popular fishing spot for trout and someone had left their fishing boat upturned at the boat launching spot.
JD. 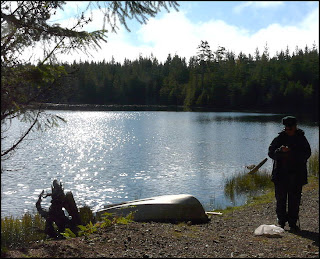 Angel Lake a popular trout fishing spot.
Posted by Gillies Bay at 12:19 AM No comments:

The next hike will be on Saturday, 15th October.
We meet at the Ballpark in Gillies Bay at 10:00am
Last week we hiked on the high ground in the Bobs Lake area to please the hikers who were keen on gathering some early edible mushrooms. There were very few fungi of any kind to be seen anywhere, but a few small fresh boletes were spotted and picked. The weather was dull and overcast and a strong south-east wind was noticeable in open areas.  For lunch we just sat beside a small creek and then afterwards visited an attractive but tiny lake on a side road.
This is the time of year when the geese are heading south in high-flying flocks that are often heard from quite a long distance away.  Some people are not aware that the flocks we see and hear are not all just Canada Geese.  There are in fact two other species coming over on fall migration and I managed to photograph a flock of about one hundred Snow Geese when we stopped for lunch on a beach on the midweek hike.  You usually need binoculars to see their distinctive black wingtips and white bodies, but listen carefully and you can tell them from the Canadas by their higher pitched calls.  The third and much less common species are the White-fronted Geese.  From time to time there are a few individuals of these two species that choose to stop and rest and feed in open areas in Gillies Bay and I've attached photos of them to earlier hike emails.  The one species of geese that don't usually migrate along the coast in the fall are the Black Brant.  Most of them take a shortcut from Alaska to Mexico by flying south on a route far out over the Pacific Ocean.
JD.
PS You can view many of my older hike emails by going to this website:—
http://texadatrekkers.blogspot.com/
You can pass this web address to friends who are not on the mailing list. 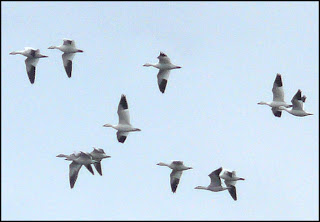 Snow Geese crossing Mouat Bay and heading south to the Lower Mainland for the winter.
Posted by Gillies Bay at 12:33 AM No comments: 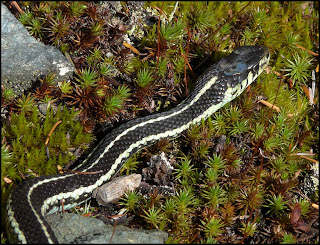 The next hike will be on Saturday, 8th October.
We meet at the Ballpark in Gillies Bay at 10:00am.

Last week we drove part way along the High Road and parked near the turnoff to Pocahontas Bay. The weather was not very nice, foggy and light rain at first, but drying out later on. As there seemed to be little chance of a view at any time during the hike I decided to check on an old logging road I had known about for many years, but had never bothered to explore. It starts from the well used route to the old fire lookout on Pocahontas and runs south towards the part of the mountain with the towers. It proved to be quite easy walking, except for some young wet and leafy branches, but still fairly open. We eventually stopped for lunch when, much to everyone's surprise, the fog began to clear, the rain stopped and the sun came out. Our old road was just a few steps from the edge of a steep ridge and we ate lunch in comfort with a fine view towards the airport and the Vancouver Island mountains.

My photo this week was taken on the midweek hike last week when we hiked from near the Bell Farm along older forest logging roads, past a quiet beaver pond, to as viewpoint high above Malaspina Strait. Just before we sat down for lunch I was able to get some good closeup shots of a sleeping Garter Snake on a bed of moss. Snakes don't have eyelids so you have to watch them to see if they move, which they almost certainly will do if awake. This one is probably a Striped Garter Snake, one of our three species, which has extra large eyes and usually three stripes yellow or greenish-yellow in colour. When it did finally wake up, it flicked its tongue a few times and moved slowly away.
JD.