The next hike will be on Saturday, 21st September.
We meet at the Ballpark in Gillies Bay at 10:00am
Last week we met in Van Anda and carpooled over to James Mack's place near Favada Point on the north-west coast of the island. The sea fog was extensive over the higher ground and it did not look like clearing off for some time, so we hiked south on the main trail not sure if we would be able to climb up onto the bluffs for the great views at lunch time.  Eventually we reached the turnoff down to Big Beach, the fog was still not far above us and the only thing to do was to head down to the beach.  The trail was in good shape and it was pleasant enough though not sunny.  It seemed odd, but there were no birds to be seen out on the water and only a single seal which soon decided to dive and was not seen again.  Someone said it would be nice to have some of the larger marine mammals show up to entertain us and I said something about how there have been many more sightings than usual in the last few weeks, including some whales. But the bay remained quiet, the sea flat calm all through lunch.  Then just as we started packing up someone saw fins out of the water some distance offshore and we soon realised a group of Orcas were headed south, some of them very close to shore. What a treat!
My photo is of two of the orcas, one male adult plus a very much younger individual follow along behind it. I'm hoping to put a name or ID to this very tall dorsal fin which seems to be quite a distinct shape and may belong to one of the Transient or Bigg's orcas.
JD. 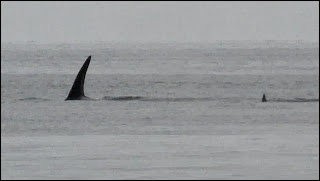 The dorsal fins of two orcas heading south past Big Beach near Favada Point on the north-west coast of Texada Island.
Posted by Gillies Bay at 12:52 AM No comments:

Next hike from Van Anda. 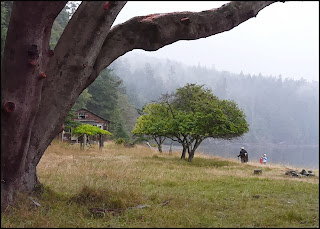 The next hike will be on Saturday, 14th September.
We meet at the Royal Canadian Legion in Van Anda at 10:00am.

On this upcoming hike we will be visiting some of the most beautiful coastline on Texada, a stretch of the north-west coast to the south of Cresent Bay. There are many trails in this area and they extend long distances along the shoreline and up to viewpoints high on a mountain side.

Last week we started off wondering if we should even bother to pick a hike on the high ground as this seemed to be entirely shrouded in fog. We decided instead to do a beach hike and headed off south past Davie Bay towards Shingle Beach, parking where the new logging road heads off to the left not far before the campground. Although there was no rain in the forecast we found ourselves in a very wet mist and for the first part of the hike umbrellas were quite useful. Taking the trail that swings up through the forest before heading back down to the beach again near the old Brown cottage we found the mist was drying out and gradually clearing. In the afternoon the sun came out as we walked back along the beach to the Shingle Beach forestry campground. In my photo I tried to capture the ethereal atmosphere of the abandoned cottage, the old fruit trees and the ancient arbutus tree.
JD.
Posted by Gillies Bay at 11:47 PM No comments:

The next hike will be on Saturday, 7th September.
We meet at the Ballpark in Gillies Bay at 10:00am
Last week there was low cloud and fog around and the chances of getting a good view from a high lunch spot seemed pretty slim.  However, we decided to head for some high ground and hope for the best.  Parking on the High Road near the last house heading north we were pleased to see the fog was quickly lifting. We hiked to the Pocahontas turnoff, then towards the bay just as far as the first side road then followed that to the top of the first steep section.  It's getting hard to see now because it's so overgrown, but a side road heads uphill again on the right and eventually reaches some open bluffs with good views.  A couple of Turkey Vultures took an interest in us for a while, coming close enough for us to see that one of them had grey on the head rather than vivid red indictating that it was an imature bird.  This species nests on Texada and probably chooses to raise it's young on grassy bluffs like the one where we ate lunch.
JD. 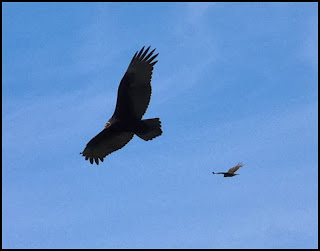 A couple of Turkey Vultures soaring above us at lunchtime on a bluff not far from the fire lookout peak on Pocahontas.
Posted by Gillies Bay at 12:41 AM No comments: