The next hike will be on Saturday, 1st February.
We meet at the Ballpark in Gillies Bay at 10:00am
Last week we had pleasant dry weather, but the high ground was mostly hidden in the clouds so we decided to do a coastal hike for a change. The shoreline running north from Shingle Beach to near Hydro West is rugged most of the way, but a well flagged hiking trail runs along the cliff tops and skirts the impossible sections by swinging inland here and there.  At any time of the year it can be a physical challenge so right now with lots of moisture everywhere is certainly not the best time!
My photo is of a clam shell that was at the side of the trail last week and probably dropped there by a gull flying up from the beach.  I knew a marine Moon Snail had cut the round hole - the interesting thing about it was that the round piece of shell is always missing except this time it was not and only fell away when touched.
JD. 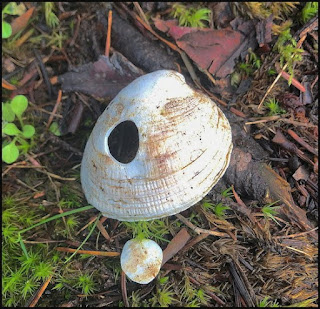 A clam shell with a large hole cut in it by the marine Moon Snail, Neverita lewesii. [TH photo]
Posted by Gillies Bay at 11:39 PM No comments:

The next hike will be on Saturday, 25th January.
We meet at the Ballpark in Gillies Bay at 10:00am
Last week we had very difficult weather conditions by Saturday after several days of heavy snowfall with ice formation on our roads  and most of us were unable to hike as we usually do.  However, two hikers managed to make their way on foot to the trails on the north side of Sturt Bay and found an area relatively free of ice and snow.  The photo for today was taken last Saturday in that area — thanks Candi!
We are now in a very different marine weather pattern with much warmer air temperatures and lots of quite steady rain day and night.
JD. 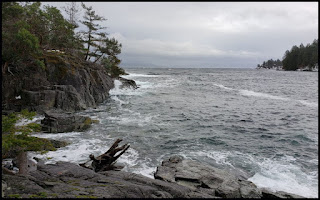 The entrance to Sturt Bay on a cool windy January day. [CL photo]
Posted by Gillies Bay at 10:23 AM No comments:

It has been really difficult to create Gmail accounts now a day, for solving this problem

We are selling PVA accounts since 2015 We have sold more than 50k Email accounts till now.

We have 100% working Phone verified accounts which you can buy and can use for email marketing, Social media and other sign up works.

You can Gmail PVA in bulk and can get discount.

Posted by Gillies Bay at 9:21 PM No comments:

Use Cashkaro Referral Code 515406 and Signup here on Cashkaro

https://cashkaro.com/r=515406 and earn life time rewards, cashback and referral earnings. It is 100% money saving and earning website. Shop on all your favorite website today and earn.

It is really helping people in saving their money and time. Start referring your friends today and earn money with cashkaro now.

There is no limit to earning cashback , you can withdraw your earnings in bank or as a amazon or flipkart voucher.

Cashkaro is offering 5 INR per referral and lifetime 10% cashback on your referrals shopping which you can withdraw in your bank or Amazon Gift voucher.

You can earn unlimited money with this cashback website. It is India's No.1 cashback website . You can get refer and earn and can withdraw your earnings in your bank account at same day.

Do not forget to use Cashkaro referral Code 515406

The next hike will be Saturday, 18th January.
We meet at the Ballpark in Gillies Bay at 10:00am.
Last week we decided to stick to a lower elevation for our hike, this time driving only just a short distance past Sienna Road and parking at the next junction where the road down to Hydro East branches off of Bell Road.  We had hoped to avoid hiking in the snow again, but in open areas there was still some snow here and there.  It was nice to be in sunshine when we were enjoying our lunch break on top of the mountain.
Last Monday morning I was listening to CBC radio and heard an interview with an expert on human heath and exercise options etc.  He makes a very good case for rough terrain hiking being good for our brains!
Jan. 13, 2020 episode transcript | CBC Radio
Daniel Levitin quote from this episode of The Current :—
"We've also been sold a bill of goods. I think about the value of exercise. Exercise is important and aerobic exercise in particular is heart healthy. But all that aerobics exercise isn't nearly as important for brain health as simple movement, particularly movement that involves navigation, navigation in open countryside. If you can. I went on a hike last summer in Quebec. We were hiking in this public park on a dirt trail and there were all kinds of tangled roots and things in the middle of the trail. You had to be careful to step over them and not trip. A light went off in my head that connected the research literature on what we called embodied cognition and what was really going on on this walk, which was that I was exercising my hippocampus, the part of the brain that is devoted to navigating and spatial memory."
JD. 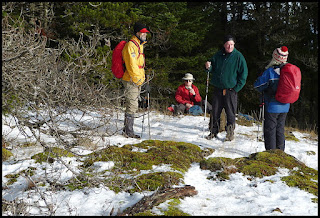 Once again we found ourselves hiking in the snow, this time on the windy summit of Mount Manzanita.
Posted by Gillies Bay at 11:53 PM No comments:

The next hike will be on Saturday, 11th January.
We meet at the Ballpark in Gillies Bay at 10:00am
Last week we felt there would still not be much snow yet on the high ground and headed up Bell Road, past First Lake and parked at the junction just after the Vancouver Island Hydro lines. There was nothing more than the odd tiny patch of snow here and there and we were soon hiking south along the gas pipeline and made good progress past the north end of Bobs Lake to the road gravel pit on the sharp corner. From there we took the steep trail up through the forest to the viewpoint at the top of Mt. Flicker, our lunch spot.  Although the elevation is pretty high here there was no snow to be seen in any direction. However, there were plenty of ominous clouds not far away from us and it was too cold to sit still for very long. We did have some snow patches on the trail on the north side of the peak, but nothing when we got back to the road again.  We did run into a brief snow shower and my shot shows it had began to turn the road white as we headed back downhill to the vehicles.
JD. 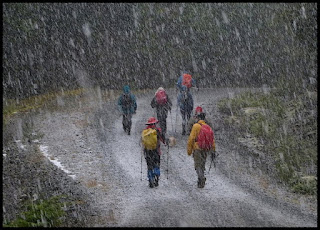 Hiking in early January on the road near Bobs Lake. The snow flakes were extra large, but it only lasted for a few minutes.
Posted by Gillies Bay at 11:42 PM No comments:

The next hike will be on Saturday, 4th January.
We meet at the Ball Park in Gillies Bay at 10:00am.
Last week we decided to drive south as far as we could hoping we would not run into any snow on the roads in the Bobs Lake area.  We did find there was snow on Bell Road as we approached the lake, but not much and we decided to keep going. We eventually parked at Fiveway Junction with snow on the ground and a cool wind blowing as we started hiking south along the gasline. Once we got into the forest there was no wind at all and hardly any snow except in the few clearings we had to cross.  Certainly the trail was slippery at times, but we made steady progress and reached the lunch spot bluff in ninety minutes.  The view we had of Lasqueti far below us and even the more distant Hornby Island was a bit unexpected as there was a lot of low cloud around. After lunch we decided to drop the plan to continue on the steep circular route back to the vehicles, and headed back the way we had come in.
JD. 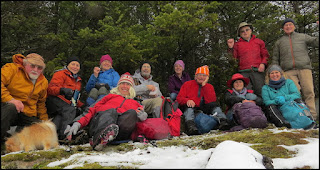 Hikers on a snow covered bluff on Wayne's Short Trail which runs south and west from Fiveway Junction on the Anderson Bay Rd.
Posted by Gillies Bay at 12:03 AM No comments: