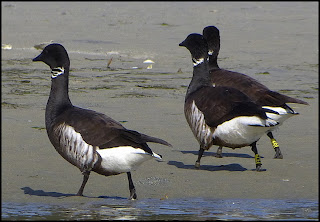 The next hike will be on Saturday, 30th March.
We meet at the Ballpark in Gillies Bay at 10:00am.

Last week we had a larger group of hikers than usual and a sunny spring day with a cool wind. We drove just a short distance along the Airport Rd and parked on the roadside at the sandpit curve. Walking north past the Airport and then taking the logging road with the iron gate headed down through the trees to Cox Lagoon. The tide was coming in, but not yet high enough to prevent walking along the beach to the sandbanks. Often when we do this hike it's on a calm day so we can look out for the little Harbour Porpoise that seem to have adopted this short stretch of water as their favourite feeding area for the last few years. At first they were around only in the summer months, but now they are here all winter. We were sheltered from the wind on the beach at lunchtime and then it was the steep trail up the cliff and more logging roads through the forest and back to the sandpit by the Airport Road.

Black Brant Geese visit Gillies Bay beach between February and the end of April on their long migration along the Pacific coast to their nesting grounds in Alaska, and the northern coast of Canada. This year the numbers are a bit higher than usual, but I'm seeing fewer juveniles than I would expect to see. The three in my photo are all adults and the two with yellow leg bands are a male and female pair. Juveniles are similar in size and plumage to the adults, except for a few faint white lines on the wing feathers which they lose when they reach one year old.
JD.
Posted by Gillies Bay at 12:33 AM No comments:

The next hike will be on Saturday, 223rd March.
We meet at the Ballpark in Gillies Bay at 10:00am
Last Saturday was quite a decent day for hiking weather and I figured it would be a good idea to do some hiking in a part of the island where we might find the rare Red-legged Frog.  Last year on a hike not far from Angel Lake we had seen and photographed a specimen of this species and as they are active and spawning in March or earlier it seemed we had a good chance of seeing evidence of spawning in the wetlands up on the higher parts of the island around Angel Lake.  However, we ran into snow on the road not far past the Vancouver Island Hydro lines and decided to park and hike south from there.  The snow was mainly concentrated on the roads, and the forest was mainly bare of snow, but our route for the hike was on road or gasline and it was only when we used a trail through the forest that we were walking on the ground.
The lunch stop was at the Bobs Lake campsite beside a totally frozen lake where any sensible frog would still be hibernating in the mud at the bottom.  Continuing our circular hike route around the lake we found we had the deepest snow to tackle, including some places where the snow had a tough crust that sometimes supported us, and sometimes gave way suddenly and stopped all forward motion. But it was fun, unexpected and really good exercise that helped to keep us warm on a pretty cool day!
JD. 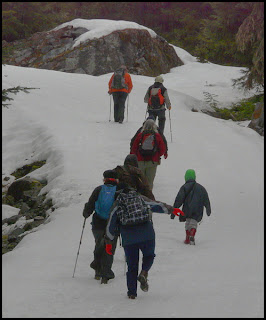 Snow on the road at Bobs Lake made walking quite difficult at times.
Posted by Gillies Bay at 12:15 AM No comments: 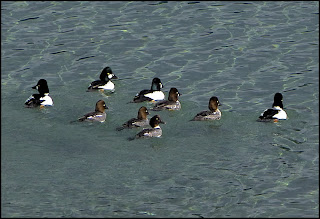 The next hike will be on Saturday, 16th March.
We meet at the Ballpark in Gillies Bay at 10:00am.

Last week we drove to First Lake and then hiked up through the forest going south towards Third Lake then branching off onto the narrow trail that leads to the top of Plateau Mountain. It was a lovely sunny day, quite mild with some patches of fog about here and there. The fairly flat area on top of the mountain is criss-crossed with flagged trails through the open forest and the hikers got split up, one group having lunch on one side where there was no fog and more view while the larger group had fog all around, but warm sunshine from above.
My photo this week is of a flock of Common Goldeneye ducks that were scooting around in Gillies Bay spending more time doing springtime mating displays than diving for fish. This group were a mix of colourful males and rather less distinctive females.
JD.
Posted by Gillies Bay at 12:54 AM No comments:

The next hike will be on Saturday, 9th March.
We meet at the Ballpark in Gillies Bay at 10:00am
Last week we met in Van Anda and hiked along the shoreline at Blubber Bay.  The weather was rainy on and off with only a brief glimpse of the sun for a few minutes.  Most of the walk out to the headland on the east side of the bay is along a gravel road that passes entrances to disused limestone quarries.  Towards the end it swings to the right and ends on the floor of a wide quarry that was once the site of a local radio station serving Powell River. A rough track climbs out of the quarry, over a rocky ridge and down to a small log strewn beach which offers a pleasant enough spot for lunch.
The Black Brant geese have returned for their annual visit to Gillies Bay in greater numbers than usual.  Most years just a few will show up in the last days of February, with the flock gradually increasing to a dozen or so in the first week of March.  This year I have been counting two to three dozen even before March 1st, and these are the highest counts I have had since 1994.  My photo this week was taken a few days ago with three of these neat little sea geese walking on the sand.  The one on the right has a plastic leg band with the code SS7 that allows me to say it was probably banded as a youngster in 2000 in Alaska and that it has certainly stopped by in Gillies Bay every year for the past thirteen years.  I know him well and can safely say it's the most bad-tempered male Brant I have ever seen, for ever picking fights with other males in the flock who almost never fight back.  It has had a mate for several years now and the pair have had youngsters in the past, but not this year. Another pair in the flock have managed to raise triplets, keeping them alive over the winter and now showing them the way back to their birthplace in Alaska
JD. 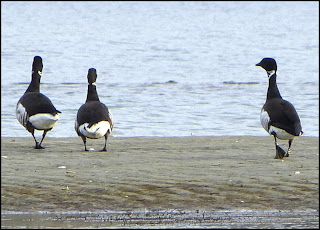 Black Brant geese on the beach in Gillies Bay. The male on the right with ID leg band Black SS7 is a very regular visitor.
Posted by Gillies Bay at 12:30 AM No comments: