Next Hike from Van Anda

The next hike will be on Saturday, 25th April.
We meet at the Legion parking in Van Anda at 10:00am.
Last week we climbed to the top of the Texada Matterhorn, just 150 years since the first climbers reached the top of the other Matterhorn, the one in Switzerland that is.  Ours is just an odd little lump of rock that jutts up through the trees on the north slope of Mount Grant.  We only discoved it when we were building the steep winding trail to the top of Grant a few years ago, and it makes a neat sideshow from the main trail.  The sides are quite steep, but no rope work is needed and the view from the top is quite good especially when the weather is clear as it was last Saturday.  We had lunch on the summit of Mt. Grant and then completed the circular hike route that follows the long ridge on the south side before joining an old logging road back to the vehicles. A thankyou to Mich for this week's great photo.
This Saturday we will be hiking to Favada Point on the north-west coast of Texada and there will be a good chance of seeing some sealions if they have not gone out fishing.
JD. 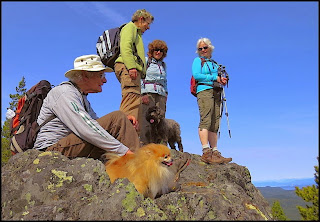 Some hikers on the top of the 'Matterhorn'  — a curious pyramid of rock on the north slope of Mt. Grant.
Posted by Gillies Bay at 12:07 AM No comments:

The next hike will be on Saturday, 18th April.
We meet at the Ballpark in Gillies Bay at 10:00am.
I am now home again on Texada after spending two weeks doing some birdwatching on Vancouver Island.  I do this every spring and concentrate on helping out with a natural history project that was started over twenty-five years ago by the US and Canadian governments.  It deals with the life history of the Black Brant Goose and studies their movements, feeding habits, population numbers and threats to their survival.  In recent years there have been cutbacks in funding for the project, but a key part of the study, the attaching of ID leg bands to some of the Brant geese every summer has been continued.  This year while out on the beaches on the east side of Vancouver Island I was able to read leg bands, some new but many older ones, on over one hundred different geese.
The Brant also visit Gillies Bay every spring and there are fifty or sixty here just now, but they are usually all gone by the end of April.  My photos shows a few of them feeding on a soft green seaweed called sea lettuce which grows mainly where a seepage of fresh water flows out onto the beaches below the high tide line.  One of the birds in my photo has a black plastic leg band with the code KRG and I know it's an older individual as I saw it myself once before this back in March 2009.
JD. 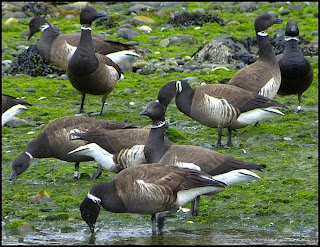 Some small Brant geese feeding on soft green seaweed on a Vancouver Island beach.
Posted by Gillies Bay at 11:25 AM No comments:

Next hike will be from Van Anda again. 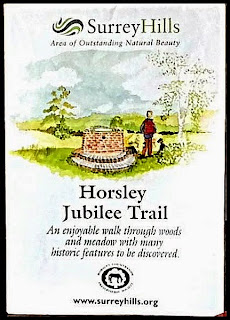 The next hike will be on Saturday, 11th April.
We meet at the Royal Canadian Legion in Van Anda at 10:00am.

Last week the weather was not that great for the special annual beach clam bake, but I understand the event was well attended. I am still busy with my wild geese chasing on Vancouver Island and have had good success with leg band reading.

While I was in England last year I found time to hike a very special trail near London that had lots of useful signposts along the route and a handy leaflet with a map showing things of interest along the way. My photo this week shows how neatly hiking trails are promoted in other parts of the world -- maybe one day here too?
JD.
Posted by Gillies Bay at 11:31 AM No comments:

Next Hike from Van Anda

Hikers meet at the Royal Canadian Legion parking in Van Anda at 10:00am and walk to Raven Bay (2 1/2 hours).
If you are unable to hike right now, used to hike or are spouses/partners/visitors of Trekkers, you are welcome!

Raven Bay road is only suitable for 4 wheel drive vehicles. but if you come by car you can park at the junction to the Raven Bay turnoff which is at Slow Farm on the High Road.  The walk down to the beach takes ten to fifteen minutes.

There will be a fire and the opportunity to roast oysters, hot dogs and bring whatever food you wish to eat or share with others.  There are logs to sit on, but no picnic tables so bring chairs if you want to sit close to the fire.  Also BYOB if you wish.

The tide should be low enough to gather shell fish, but don't forget to have your current Saltwater Licenses.
After the BBQ those who drove down to the bay will take the drivers and those who are unable to walk back to their vehicles in Van Anda or on the High Road.

For more details please get in touch with David Taylor or Russ Sparks. I'm still chasing wild geese on Vancouver Island so will not be on the next couple of hikes.
JD.
Sent from my iPad-mini
Posted by Gillies Bay at 11:42 PM 1 comment: