The next hike will be on Saturday, 31st December.
We meet at the Ballpark in Gillies Bay at 10:00am.
Last week we drove south almost down to Shingle Beach and then turned left and up into the extensive new logging area.  We parked where the road levels off and heads south and then started walking in the same direction to the first Y junction.  The right fork headed down slope for some distance and eventually did a U turn to an area where we could see we were not far from the sea which we could see through a belt of open forest below the road. An old overgrown logging road gave us an easy route down to our planned lunch spot on a part of Shingle Beach close by the old cottages we have visited many times before.
My photo this week is of part of a fallen section of tree trunk that had become covered with mosses and several different fungi that I assume are members of the bracket fungus family, Polyporaceae.  I'm not sure exactly what these are, but I can say there seemed to be quite a few different varieties on this log and some like it appear in online photos. If you are interesting in putting a name to them you might look in one site that I found interesting:—
http://www.first-nature.com/fungi/~brackets.php
While having lunch we were surprised to see quite far out to sea one or two quite active Humpback Whales.  They tend to be more often seen recently off the north end of Texada, around towards Van Anda and over on the mainland side of Malaspina Strait.
JD. 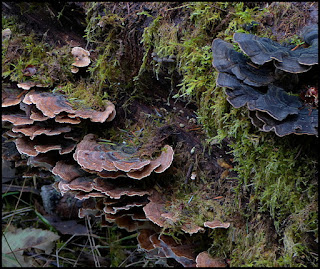 Bracket Fungus on a rotting log that has been lying on the ground a very long time — not far from the old cottages on Shingle Beach.
Posted by Gillies Bay at 12:34 AM No comments:

The next hike will be on Saturday, 24th December, Christmas Eve.
We meet at the Ballpark in Gillies Bay at 10:00am.
I have a photo this week that is quite appropriate for the holiday season.  In Europe there is the old Christmas tradition of kissing beneath a sprig of the native mistletoe plant and my photo is of a north american relative of that plant.  In both cases the plants are parasites that grow from seeds that get stuck on the branches of suitable kinds of trees, in Europe quite often apple trees and here on Texada the host is usually one of our native conifers.  My photo is of a mistletoe growing on the thin branches of a Jack or Shore Pine, Pinus contorta.
JD. 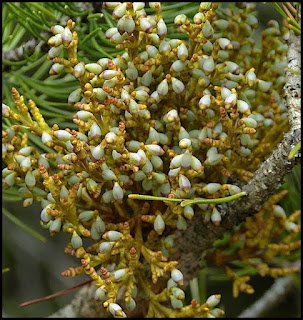 The fairly common parasitic plant Mistletoe growing in the branches of a pine tree.
Posted by Gillies Bay at 12:46 AM No comments: 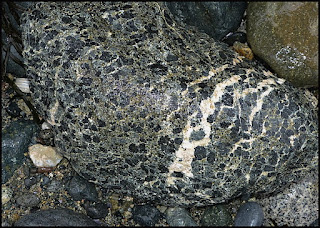 The next hike will be on Saturday, 17th December.
We meet at the Ballpark in Gillies Bay at 10:00am

Last week much of Texada had a white covering of snow and only the lower elevations had none. To avoid any slippery places as far as we possibly could we decided to just keep the hike fairly short and make our destination the beach near the Sandbanks between the community and the Texada Airport. We started from the Airport Rd. near the water tower and quickly found there was some almost invisible ice on the first part of the gravel road. We made it safely down to the beach on our short trail through the forest and had no problem walking south along the shore as the tide was not too high. Lunch was on the logs at the high tide line hoping we might see some of our less common marine mammals, but no luck this time. On our return to the vehicles we climbed the steep Sandbanks Trail and were pleased to find the thick strong rope was firmly in place to help us climb the very steepest sections.

The subject of my photo this week is a very unusual rock that appears to be a fracture zone breccia with jagged veins of a white mineral that is probably feldspar. I would guess the small black fragments are pieces of the originally solid rock which was broken up as a liquid lava was forced in under great pressure.
JD.
Posted by Gillies Bay at 6:33 PM No comments:

The next hike will be on Saturday, 10th December.
We meet at the Ballpark in Gillies Bay at 10:00am
Last week we had wanted to drive up to Thompson Rd. and hike in that area going to a bluff with a view for lunch.  However, as soon as we turned off the Davie Bay Rd. we found ourselves faced with getting across a whole series of freshly dug water bars some of which were deep enough to damage the underside of even a high clearance pickup.  So we decided to park the vehicles and set of on foot up the hill.  It was quite pleasant and we eventually reached Thompson Rd., but without enough time to reach any of our favourite viewpoints.
My photo is from a hike we did last month.  A very old fallen tree beside the trail had supported the growth of two large brown bracket fungus that had such a shiny upper surface they looked as if someone had painted varnish on them.  They just happened to be shedding spores from the underside and these make it look as if the green leaves have been painted with a spray can!
JD. 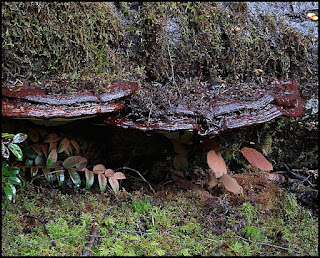 A pair of shiny Bracket Fungus shedding spores onto some foliage below them.
Posted by Gillies Bay at 11:41 AM No comments:

The next hike will be on Saturday, 3rd December.
We meet at the Ballpark in Gillies Bay at 10:00am.
Last week we found we had a dull day with very thick low cloud when we met at the Ballpark so we knew it would be a waste of time seeking out the sun on the high ground.  We still wanted to visit the Cook Bay area to explore another old road we had noticed a couple of weeks earlier.  Taking our new driving route to the Cook Bay gate that crosses an extensive logging area above Shingle Beach we made good progress until on the last section of new road we were stopped by a recently fallen tree that was too heavy to move and too thick to drive over. A quick change of plans was called for and we started our hike by setting off on a side logging road that looked as if it might go for some distance.  After a while we reached a fork and checked the left fork first to see if it would get to somewhere.  It didn't, so we turned around and next tried the right fork. Just before reaching the end we spotted a very old logging road that had some ATV tracks on it and heading downhill through quite dense forest. This time we found we did get somewhere interesting — a beach we had never visited before!  To the north it extended past the Brown Cabins to Shingle Beach, but to the south there was no beach at all just low grassy bluffs extending to a distant headland. We climbed onto the first bluff and made it our lunch spot for the day. The sea was flat with a few sea birds here and there, seals as usual and then a couple of slow moving Stellar Sealions heading south very close to shore.
My photo was taken as we ate lunch last week and shows the small flock of Trumpeter Swans that flew quietly by, also heading south.
JD. 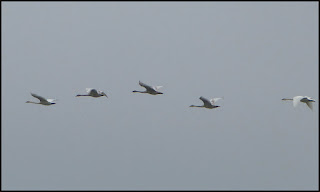 A small flock of Trumpeter swans flying south past us at the south end of the very long Shingle Beach.
Posted by Gillies Bay at 11:52 PM No comments: