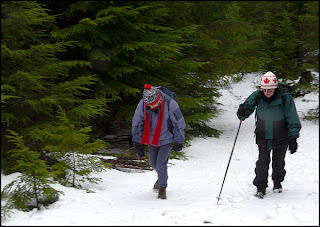 The next hike will be on Saturday, 28th January.
We meet at the Ballpark in Gillies Bay at 10:00am.

Last Saturday the weather was fairly clear and a hike to a viewpoint on high ground seemed to be a good choice. In Gillies Bay there was no snow to be seen anywhere and we headed up towards Bell Farm and were quite surprised to find the roads in the shade covered in a sheet of ice. This cut short our driving plans and we parked a short distance along Hydro East Road. The hiking was pleasant in the forest as we were protected from the stong wind which we could hear in the tops of the trees. At this elevation there was snow on the ground everywhere until we reached the wooded bluff with a view of Malaspina Strait and the mainland mountains. That small area had obviously had sun enough to melt the snow and with less wind there we ate lunch in comfort.
JD.

The next hike will be on Saturday, 21st January.
We meet at the Ballpark in Gillies Bay at 10:00am.
Last week we had quite nice weather for our hike which started from the campgound at Shingle Beach.  We took the usual route that follows an old logging road uphill in the forest for quite a long way before turning south and dropping steadily down to the beach just north of the old deserted cabins.  We had lunch on the beach logs while a large number of seals hung about watching us quite intently for the whole time we were there.  There must have been some fish around as there was a fair number of gulls on the water and a few sealions that were quite active, not resting and not going away from the small area of water close to where we were sitting.
My photo was taken last month on a mid-week hike when we visited this beaver dam on the Pocahontas Bay Road.  This location, in fact the shallow water near the shore beyond the dam was last year used by the endangered Red-legged Frog as a spawning area.  I visited with a frog expert in March and she showed me how to search for the egg masses of this species and we found more than a dozen in this part of the pond.  This is quite an exciting discovery as I am told it is becoming hard to find areas on the coast of BC that is still the habitat of this species of amphibian.
JD. 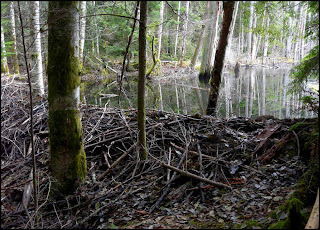 A beaver dam close to the road down to Pocahontas Bay. This seems to have overflowed in December and flooded the road lower down the hill.
Posted by Gillies Bay at 12:03 AM No comments:

The next hike will be on Saturday, 14th January.
We meet at the Ballpark in Gillies Bay at 10:00am
Last Saturday the weather was rainy early in the early morning, but it had stopped by the time we reached the parking place near Eagle Creek.  We headed down to the north end of Davie Bay beach and found the strong south easterly wind made it rather uncomfortable once we were in the open facing south.  For lunch we found that the small wooded bluff at the end of the short side trail  just north of Davie Bay gave us the protection from the wind we needed to eat in comfort.  A tug and barge were heading north and overtaking them was a freighter that I didn't recall seeing before so I took a telephoto to get the name. An internet search turned up very little information, but there were a few photos of it and I read that it had been built twenty years ago, was designed to carry general cargo and was operated by a US company on the east coast, gulf coast and west coast of North America.  It was probably running from Puget Sound north to Alaska.  We don't often see freighters passing Texada, but they are actually less common now than they were thirty or forty years ago which is quite the opposite to the cruise ship traffic.
JD. 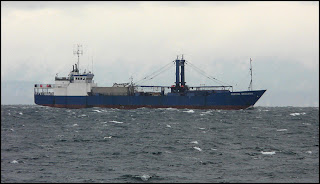 A one thousand ton coastal freighter heading north past Davie Bay.  The "Coastal Navigator" is probably en route to Alaska.
Posted by Gillies Bay at 12:19 AM No comments:

The next hike will be on Saturday, 7th January.
We meet at the Ballpark in Gillies Bay at 10:00am.
Last week for a change the hiking Texadans were out numbered by visiting hikers. It was a cool, cloudy day with limited visibility, but we headed for the high ground in search of views for the visitors. When we reached the parking spot for the Mt. Grant trail there was a thin layer of ice pellets and snow on the road so we needed to move quickly to keep warm.  Tackling the steep northern slopes of the mountain soon had most of us shedding layers, but we were glad to put them on again at the rocky lunch spot.  The sun came out while we ate and the view opened up, but then was quickly lost again as a fog belt rolled in with a cold breeze.
JD. 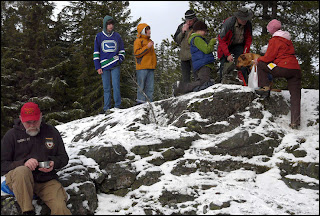 Lunch on Mt. Grant on a snowy Christmas Eve hike.
Posted by Gillies Bay at 12:07 AM No comments: