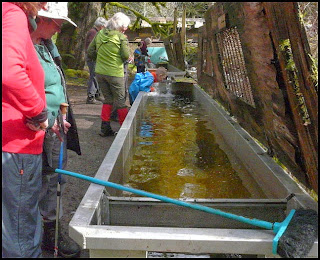 The next hike will be on Saturday, 28th March.
We meet at the Ballpark in Gillies Bay at 10:00am.

Last week we drove a short distance down the road to Davie Bay and parked at the first metal gate on the right. This hike takes us south not far from the coastline although the sea views are non-existant because there is still quite a lot of forest between the old logging road and the cliffs. Our destination this time was to be one of the pocket beaches although different side roads and trails go down to the seashore at different points. It was interesting to see so many flowers on the otherwise bare branches of the salmonberry so early in the year, but following the extra mild winter we have had it should not be a surprise. On the drive back from the hike we stopped at the Mouat Creek bridge to take a look at the two holding tanks for chum salmon fry. In about a week from now they will all be carefully released into the fast flowing water and within a few hours all will be swimming freely in the saltwater.
JD.
Posted by Gillies Bay at 5:19 PM No comments:

The next hike will be on Saturday, 21st March.
We meet at the Ballpark in Gillies Bay at 10.00am
Last week we had quite a long hike as we started off right from the ballpark for a change.  Heading up School Road and taking the left sideroad from the left fork at the Y junction we once again took advantage of the network of new bike trails that now crisscross the forested area to the north of the community.  Eventually we reached the old Cap Sheaf road again much higher up and soon after branched off on the left heading towards Turkey Vulture Bluff.  For lunch we stopped at a high spot on my trail with a view through the trees of the distant mountains on Vancouver Island.
My photo this week was taken as we started downhill on another bike trail passing a giant boulder topped by a cluster of ferns from which arose this lovely Red Currant bush in full bloom.  These are not all that common on Texada, but the few that survive the deer are popular with the earliest male Rufous Hummingbird.
I have to give advanced notice of the special hike on Saturday, 4th April which includes the annual Texada Trekkers beach BBQ potluck at Raven Bay.   I will include more info on this event in my next weekly email hike notice.
JD. 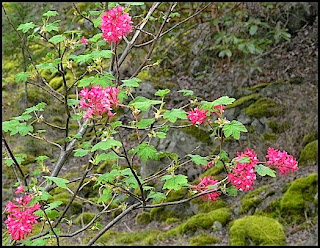 A flowering wild native Red Currant bush on top of a moss covered rock beside the trail.
Posted by Gillies Bay at 12:23 AM No comments:

The next hike will be on Saturday, 14th March.
We meet at the Ballpark in Gillies Bay at 10.00am.
Last week we had more hikers than usual and drove a little longer than usual going about half way down the long road to Cook Bay on the west side of Texada. Parking was at the turnoff where an old logging road starts the climb uphill towards Angel Lake on the high Central Plateau area.  We were not going quite that far our destination being a large beaver pond situated to the south-west of Angel.  The road is in quite good shape with a reasonable walking surface most of the way and we   made good time reaching the beaver dam not much past 12:00 o'clock.  It was a lovely calm sunny day and and very pleasant to sit on some extra large conifers that the beaver had cut down a while ago.
My photo was taken from the lunch spot looking east with the northern part of the rugged Twin Peaks ridge towering above the forest. We have a trail that leads to the very top of that rocky bluff on the right of my picture — it has quite the view!  The many dead trees were killed years ago when the beaver first built their dam and raised the water level higher than the roots of those trees and effectively drowned them.  This stand of dead trees along the shoreline of a pond is a clear indication that beaver are or have been active in an area.
JD. 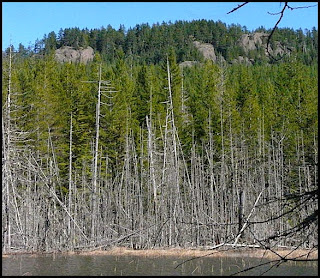 A view of the north end of Twin Peaks from a large beaver pond not far from Angel Lake.
Posted by Gillies Bay at 12:05 AM No comments:

The next hike will be on Friday, 7th March.
We meet at the Ballpark in Gillies Bay at 10:00am
Last week we had a lovely dry sunny day for our hike and picked one of the more popular hiking trails taking us to the summit of Mt.Davies for the lunch spot and the great views on a cloudless day.  It's the last week in February and yet the mountain peaks close to the coast are quite bare of snow and even in the far distance the snow line is clearly much higher than one would expect it to be in mid-winter.  We have had lots of precipitation this year, but always with unusually high air temperatures.  On some days in January and February the daily highs were all time records for those days of the month at the Powell River Airport weather station.
JD. 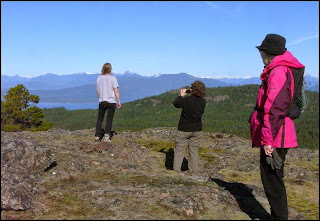 At the summit of Mt. Davies looking north-east towards the mainland mountains.
Posted by Gillies Bay at 12:22 AM No comments: