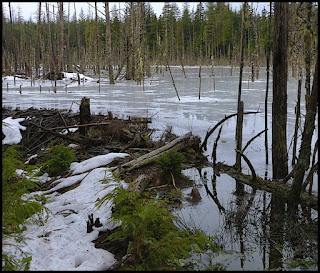 The next hike will be on Saturday, 28th January.
We meet at the Ballpark in Gillies Bay at 10:00am

Last week we parked again on the Hydro East Rd. as we had done a couple of weeks ago, but this time the snow had all gone. Hiking on a side road through the forest was very pleasant as the snow had all gone except that we were surprised to find lots of snow on the ground just in the places where the tree cover was missing. Before getting to our lunch spot we stopped by the beaver dam at Blown Up Triler Lake and found it still frozen with the beaver no doubt keeping warm inside their snow covered lodge. I think that must be it on the left side of my photo on the edge of the pond. The beaver are certainly still in residence as close to the dam some young fir had recently been cut and peeled twigs were luing here and there nearby.

As we ate lunch under the trees and overlooking Nelson Island and the Coast Mountains we heard the distant roaring of some sea lions far below us.
JD.
Posted by Gillies Bay at 12:26 AM No comments:

The next hike will be on Saturday, 21st January.
We meet at the Ballpark in Gillies Bay at 10:00am
Last week we drove a short distance south towards Davie Bay and parked at the first iron gate on the right. From there the hike follows an old logging road that runs through some recently logged areas that slope gently down to the coastline of Mouat Bay. A narrow grassy trail branches off soon after passing the road junction where the drivable road starts and we took this side trail being careful to avoid making any noise that might disturb the current resident of the rustic squatters cabin between the trail and the cliff top.  This beach is so pleasant at any time of the year and it made a perfect spot for lunch on a warm sunny day in January.  While eating lunch someone spotted splashing far offshore that turned out to be a very large number of Pacific White-sided Dolphins heading north up the strait madly jumping out of the water as they went.  Nearer to shore a few sealions calmly swam past us very close to shore and even stopped briefly to see what we were up to!
JD. 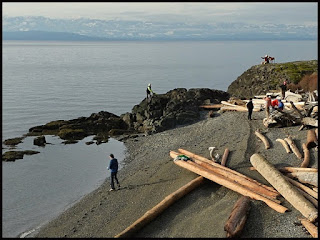 At one of the small pocket beaches just north of the mouth of Eagle Creek on a calm and mild sunny day in the middle of winter.
Posted by Gillies Bay at 12:12 AM No comments:

The nest hike will be on Saturday, 14th January.
We meet at the Ballpark in Gillies Bay at 10:00am
Last week the day started bright and sunny, but pretty cool.  We did consider going up as high as Mt. Davies if we could drive that far without gettting into too much snow.  There is snow on the ground now, but that Saturday morning there was no snow at all on the ground at Gillies Bay, so we did not realize how much there was higher up.  Anyhow, we decided to start driving and play it by ear, adjusing our hike plan accordingly. By the time we reached the Bell Farm road junction we could see we would not be able to drive much further. We parked at the first wide spot on Hydro East Rd. and continued south on foot.  The snow plough had smoothed off the surface and while we could tell there was ice on the road itself the skim of snow was near perfect for walking without falling.  Just after the summit where the road starts the long descent to the sea we turned off onto an old logging road to head to a lunch spot with a good view and found walking very much more difficult.  The snow surface was a tough crust which sometimes supported our weight and sometimes not.  We reached a viewpoint with some sun but no wind with that fantastic view of the snow covered peaks on the mainland on the far side of the sea far below.
After lunch we had time to do some more exploring and reached the top of a rocky ridge after taking an hilarious route in deep snow between some nice looking Christmas trees.  My photo is a shutter delay shot that had me dashing across the road to be included in the picture.  A great hike for the personal memory bank I would say!
JD.

All happy in the snow!  A mid-winter hike along Hydro East road that had been very nicely ploughed for us to enjoy.
Posted by Gillies Bay at 12:20 AM No comments:

The next hike will be on Saturday, 13th January.
We meet at the Ballpark in Gillies Bay at 10:00am.
Last week we were faced with the prospect of snow arriving later in the day and the mountain tops shrouded in cloud.  A low level hike made sense under the circumstances so we headed across the island to Pocahontas Bay and parked a little south of the bay on the old logging road called Pocahontas Main. From here the walk took us through forest and recent clearcuts then down into a small belt of lovely old growth giants of Douglas fir and red cedar to the shoreline we call Tower Beach.  The view from there across Malaspina Strait takes in the tall metal surge tower just above the very old hydro power station built a long time ago to serve the pulp and paper mill in Powell River.  As we returned to our vehicles the snow flakes started to fall and by the time we had driven back up to the High Road the ground had turned white.
My photo this week was taken on a very special hike that took a large group of hikers up to the top of Mt. Dick near Anderson Bay.  None of us, including me, had ever done that hike before and the views from the summit were very well worth the effort. I posted one photo from the top in a Trekkers email in August and this is anothe view in a different direction.  The nearest headland is, I think, Partington Point and the next headland beyond that is probably the Twin Beach Point that we visited on a hike also last summer. The top of Mt. Shepherd is out of view and much higher up the very steep slope on the right of my photo.
JD.
http://texadatrekkers.blogspot.ca/        26th August 2016 hike email. 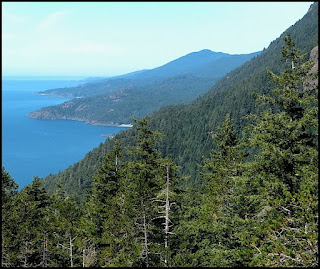 The view north up the west side of Texada from Mt. Dick near Anderson Bay. Mt. Davies is the high peak in the distance.
Posted by Gillies Bay at 12:30 AM No comments: