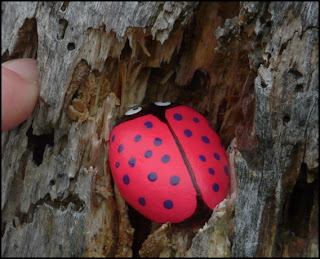 The next hike will be on Saturday, 27th April.
We meet at the Ballpark in Gillies Bay at 10:00am.

Last week the forecast for Saturday was very good, "sunny all day" it said, and it was that way when we set off. We decided to try to find an old logging road that we had hiked before on a mountain side to the north of Russ Creek. We knew it had been partly rebuilt by loggers, but were able to find a way to get back onto it part way along. It proved to be in pretty good shape and we made good progress eventually reaching a bluff much higher than we had reached before. By then some clouds had moved in and it even rained lightly for an hour or so, not quite what the forecast had predicted. The view from the bluff was great, extending from Scotch Fir Point well to the south of Pender Harbour, but some sunshine would have improved it a good deal.

My photo is of an insect we found in a cavity on a dead tree that inspired the name Ladybug Bluff Trail for this new hike route. Somehow I think the ladybug will still be there the next time we do the more than 1,000ft climb to the viewpoint.
JD.
Posted by Gillies Bay at 12:42 AM No comments:

The next hike will be on Saturday, 20th April.
We meet at the ballpark in Gillies Bay at 10:00am.
Last week the annual Trekkers beach potluck and clam bake was held at Raven Bay and was well attended.  I have just returned from my annual two week birdwatching trip to Vancouver Island and was not able to do the last two hikes, but I will be guide for this next one.
I have problems sending out the weekly emails sometimes and the last two were affected in different ways.  I had to skip the one for last week and the one before it seems to have failed to reach some of the intended recipients including the website blog at www.gilliesbay.ca.  I'm not sure what the problem was and I hope things are working properly again this week.
On my last day on the island I was on a sandy beach at Kye Bay just south of the Little River ferry dock in Comox and saw a lone shorebird that I don't think I have ever seen before. It came quite close and I was pleased I managed to get a good photo of it as shorebirds can be so difficult to identify from memory.  This one is a Marbled Godwit, quite a large bird that nests in summer on the prairies in Canada and the northern states and spends the rest of the year on both east and west coasts mainly feeding on sandy beaches. This individual is an adult in breeding plumage.
JD. 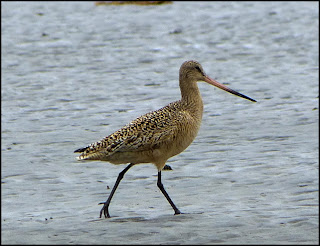 A lone adult Marbled Godwit, a shorebird that nests on the Canadian prairies and the adjacent states.
Posted by Gillies Bay at 1:22 AM No comments: