The next hike will be on Saturday, 27th December.
We meet at the Ballpark in Gillies Bay at 10:00am.
Last week we set off from the Ballpark in vehicles and headed up to Thompson Road driving south to park about a kilometre north of the Vancouver Island Hydro line.  It was still very windy with a gale blowing from the south-east, but while the cloud cover was thick it was not raining.  Rain was in the weather forecast and we were lucky it held off until our lunchtime break which we had at the start of the Cook Bay Rd.  Being on the west side of Texada with high ground to the east and south of us meant we were generally sheltered from the worst of the wind.  From time to time we caught glimpses of the ocean far below us and could see the way the waves were breaking into irregular masses of white water as far as the eye could see.
I took the photo of the forestry notice at the road side where the forest is now fairly mature and was not too surprised to see the majority of the trees were healthy fir and hemlock.  However, I could see no live White Pine, just a small number of dead or dying ones here and there. Clearly some of the White Pine that had been pruned the way the notice explains did survive long enough to grow quite tall, but the long term survival rate was extremely low.  Some of the trees of this species that have grown to maturity in other parts of Texada clearly have a genetic resistance to the rust disease and forestry is attempting to breed resistant strains for future replanting projects.
JD.

Forestry Notice on Thompson Road near Mt. Davies.
Posted by Gillies Bay at 4:42 PM No comments:

The next hike will be on Saturday, 20th December.
We meet at the Ballpark at Gillies Bay at 10:00am
Last week the rains continued in record volumes on several days and it seemed only natural to pay another visit to Stromberg Falls near Davie Bay.  It was a dull day, but dry and without wind so really quite pleasant for hiking. We parked at the usual spot and crossed the old logging road bridge which now consists of slowly rotting logs in a parlous state and were surprised the water level was not a bit higher.  However, the falls were roaring down with two of the three sections in full flow and lots of water coming out of the cave.  Returning to the main trail we then hiked up to see how things looked at Grow-0p Creek and it was no surprise to find the normally dry overflow channel to be in full flood.  Evidently the cave system was only able to take in a small percentage of the flow coming down from the high ground.  By the way both Balanced Rock Lake and Mystery Lake are in the catchment area of this important creek.
On this visit to the area I was able to find a higher location in the forest where I could get a fairly decent photograph of the higher part of the falls and I have that as my photo for the week.  It shows the top of the cliff where the water is flowing out of a large pool on a ledge and just a glimpse of the thirty foot waterfall that drops from the top of another cliff above that. On the right of the picture you can just make out the wider of the three sections which is often the only section with water coming down when the creek is not in flood.  Before lunch we climbed to a mossy bluff much higher up on the hill side and sat to eat close to the route the creek takes down a series of rapids and falls in a relatively open part of the forest.
JD. 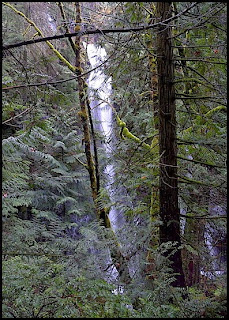 A view of Stromberg Falls from a higher location in the forest.
Posted by Gillies Bay at 12:09 AM No comments: 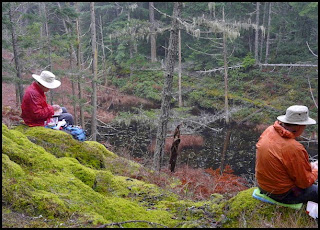 The next hike will be on Saturday, 13th December.
We meet at the Ballpark in Gillies Bay at 10:00am.

Last week we drove up Shelter Point Rd and then left onto the High Rd towards Van Anda, parking at the last house on the right. Walking north from there we eventually turned off the main road onto a side road just before the Pocahontas Bay turnoff. This is a fairly recent logging access road that winds it's way through an elongated and replanted cutblock. Near the end of the road we took a quad trail that heads west and provides a route running through mostly forest all the way down to Gillies Bay. This took us to Cap Sheaf Lake where we left the quad trail and walked north along the east side of the wetland to a delightful lunch spot on the top of a mossy cliff. The weather remained dry but cloudy and the tops of the taller forrest trees were shrouded in mist.

After lunch I suggested instead of retracing our steps the way we had come we might try finding a way through the forest to meet up with the old road to Cap Sheaf mining claim, and this we did. The forest is fairly open below the canopy in the area and we made good progress, reached the old road and followed it north for a while and then got onto another quad trail that winds south-east to the High Road.
JD.
Posted by Gillies Bay at 11:28 PM No comments:

The next hike will be om Saturday, 6th December.
We meet at the Ballpark in Gillies Bay at 10:00am
Last week we were very fortunate again with the weather.  It was just a lovely dry and calm winter day with hardly a cloud anywhere in the sky.  The snow fall from the day before was crisp and unmelted in the shady areas, but where the sun had reached it there was not much left even at the higher levels.  We decided to stay away from the roads which could have been slippery in places and started our hike right from the Ballpark in Gillies Bay. We just followed School Road, climbing steadily up through the forest and past Opko's Farm to reach the High Road for lunch.  It was a good long uphill walk that kept us warm all morning, and it was pleasant too following the same route on the return.
JD. 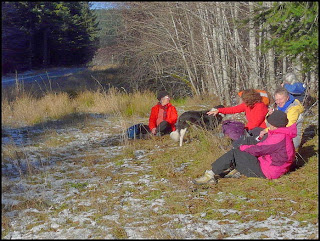 A warm sunny spot beside the High Road at the School Road Junction.
Posted by Gillies Bay at 11:21 PM No comments: