The next hike will be on Saturday, 27th November.
We meet at the Ballpark in Gillies Bay at 10:00am.
Last Saturday we decided to not go far from Gillies Bay as the snowline was low on the bluffs above the bay. A short drive to the Texada Airport and then hiking down to Cox's Lagoon and along the beach to Sandbanks was really quite nice, cool certainly, but with no wind blowing not at all unpleasant. We searched in vain for the tiny black dorsal fins of the Harbour Porpoise that were here every time we visited through from early spring to late summer. Lunch at the base of the sand slide then up the steep path and back to the start on the old logging roads.
My photo is one I took on the recent hike north from Hydro East. A small creek appears from the dark forest and plunges down a series of small steps in the unusually pale bedrock. The short vegetation on both sides and mossy rocks here and there make a strikingly attractive natural rock garden scene that I just had to capture.
JD. 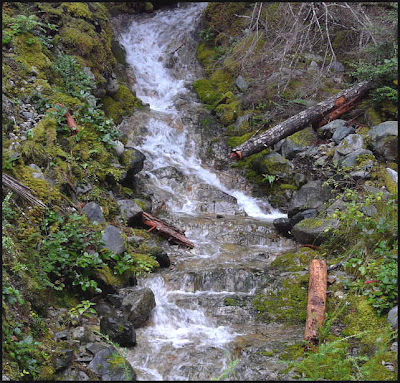 A natural rock garden scene beside a logging road north of Hydro East.
Posted by Gillies Bay at 11:00 PM No comments:

The next hike will be on Saturday, 20th November.
We meet at the Ballpark in Gillies Bay at 10:00am.

This year was remarkable for the extra rain we had towards the end of summer and the result has been a better year than usual for mushrooms. Another result has been the abundance, size and juicyness of the glossy black berries on our evergreen huckleberry. In recent years they have tended to be quite small and somewhat dry and lacking in flavour, perhaps because the rains started later in those years. I have often pointed out that this species of shrub, Vaccinium ovatum, and sometimes called black huckleberry is actually quite uncommon in most of coastal BC. It's rare around Powell River and on the Sunshine Coast, but extremely abundant over much of Texada. The fruit is eaten by many birds including grouse, and mammals such as racoons and humans who find it sweet and tasty when gathered along hiking trails in the fall. My photo shows some heavily laden branches near our lunch spot on a recent hike.
JD. 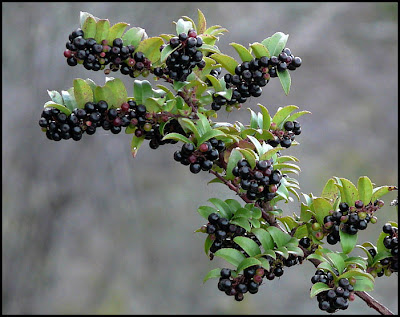 The juicy ripe berries of Evergreen Huckleberry, Vaccinium ovatum, in November
Posted by Gillies Bay at 9:01 PM No comments:

Next hike from Van Anda

The next hike will be on Saturday, 13th November.
We meet at the Legion in Van Anda at 10:00am.

Last week we hiked north from Hydro East and found quite a few edible mushrooms in this area of fairly open mossy forest. Just before lunchtime we decided to explore a well used ATV trail that branched off to the right and headed steeply downhill, curious as to where it might end. I was hoping for a nice viewpoint from an open bluff, but instead it ended on a rocky beach where people had camped not too long ago.
My photo is one I took back in early September on a hike to Black Mountain. On Texada there is a small plant that has the common name Blue-eyed Grass. It likes damp areas such as ditches and the margins of swamps, but it's not a grass and has thin flat leaves that make it look rather like a miniature iris. Much less common is a close relative, Golden-eyed Grass or Sisyrhinchium californicum, with lovely buttercup yellow flowers.
JD. 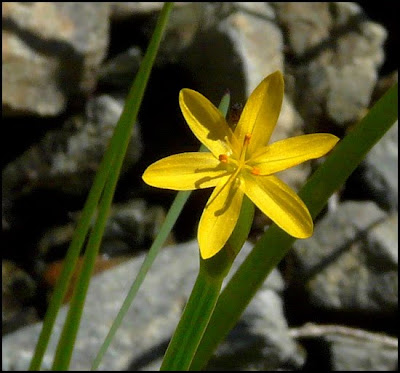 Golden-eyed Grass, Sisyrhinchium californicum in a roadside ditch.
Posted by Gillies Bay at 11:25 PM No comments:

The next hike will be on Saturday, 6th November.

We meet at the Ballpark in Gillies Bay at 10:00am.
The mid-week hike this week visited Davie Bay and Stromberg Falls. The falls are still dry as there has not been enough rain to get them into action yet. However, the creek below the falls does have quite a lot of water as the two caves are pouring lots of underground water into it just now. And yes, there are two caves as there is a second one we don't usually visit quite close to the parking place. My photo was taken at Davie Bay shortly after our visit to the falls. A slight breeze was gently sweeping the morning mist away from the north end of the bay 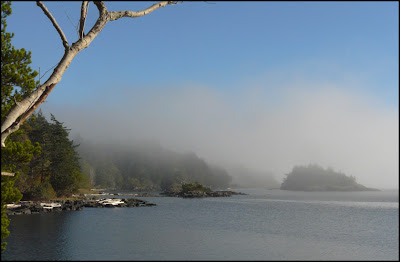 Davie Bay as the morning mist was clearing.
Posted by Gillies Bay at 11:24 PM No comments: