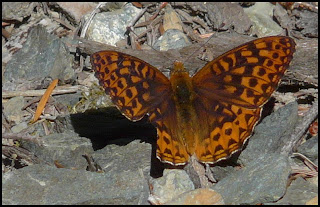 The next hike will be on Saturday, 31st July.
We meet at the Ballpark in Gillies Bay at 10:00am.

Last week we hiked in to the lovely secluded lake to the northwest of Masck Farm. On the way there is a stretch of logging road that always seems to have more than the usual numbers of butterflies and more different species as well.

There is one group of these insects, the Fritillaries, that I find very elusive when it comes to getting good photos of them. This time I was lucky and the result is attached to this message. I'm still not sure which species this one might be as there is so much variation in the markings of this group. It's a lucky individual as it just missed being caught and eaten by a bird, instead sporting a space where part of the left hind-wing should be.
JD. 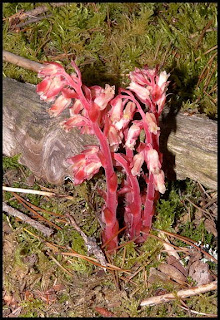 The next hike will be on Saturday, 24th July.
We meet at the Ballpark in Gillies Bay at 10:00am.

Last week we had quite a large group on the hike including some visitors from off island who greatly enjoyed the Mt. Grant trail.

My photo is a recent one that I took while guiding our biologist visitors who have spent a number of days this summer doing research on the resident Western Painted Turtle. I spotted this bright and interesting flower beside the trail that leads in to Cap Sheaf Lake from the High Road. The flower stems of Pinesap are the only part of the plant which ever appears above ground. It's a parasite on fungus which lives in the soil and derives nutrients from the roots of pine trees, so it has no need for leaves with chlorophyll like most other flowering plants.

There seems to be some disagreement over the scientific name so I don't know if it should be Monotropa hypopitys or Hypopitys monotropa, but I do know it is found all around the Northern Hemisphere including Asia as well as Europe and North America. This specimen is unusually bright red for this species which is more often pink, pale yellow or even white.
JD.

The next hike will be on Saturday, 17th July.
We meet in at the Ballpark in Gillies Bay at 10:00am

Last weekend it was Sandcastle and so a very small group came along to the hike. We decided to hike on Lafarge property as the company is keen to establish its credentials as a 'green' organization and is very interested in knowing about our hikes and hoping we will use their lands as much as possible. The hike started from the main road not far south of the Log Inn and meandered south along old logging roads with a multitude of flowers until we reached the edge of the area of the Whiterock Pit. It was hot in the sun and we found a shady spot with a view for eating lunch.

My photo was taken nearby and shows the secluded north end of Paxton Lake with the high ridge of Pocahontas in the distance.
JD. 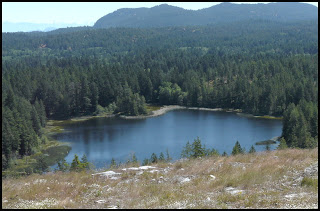 Next Hike - we meet at the Community Hall in Gillies Bay

The next hike will be on Saturday, 10th July.
To avoid a conflict with Sandcastle activities we will meet at the Community Hall parking lot in Gillies Bay at the usual time, 10:00am
Last Saturday we hiked to the Mouat Bluffs between Gillies Bay and Davie Bay to view the wild cactus. I was not sure just when they would be in full flower this year as the weather has been so unusual. As it turned out there were not all that many clumps with flowers this time and most of the flowers were over anyway. However, there were just a few that provided nice photos for the photographers among us as a few late blooms with clear yellow petals were still open. The flowers that are pink and twisted are the ones that finished flowering probably a few days earlier.
JD. 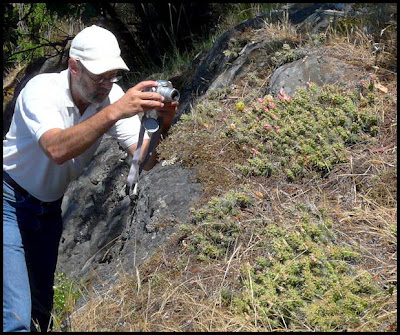 Some of the many large clumps of the native Opuntia sp. Prickly Pear cactus at Mouat Bluffs.
Posted by Gillies Bay at 2:24 PM No comments:

The next hike will be on Saturday, 3rd July.
We meet at the Ballpark in Gillies Bay at 10:00am.

My photo this time is from the mid-week hike last Wednesday when we visited the north end of Davie Bay and stopped for lunch on the long beach that runs north from the UREP [designated area for the Use, Recreation and Enjoyment of the public]. The sea was quiet and it was quite a surprise to suddenly have a small pod of marine mammals not far out from the beach and right in front of us. They were swimming north quite slowly and I was not too sure what species we were seeing. I took some still photos and a short piece of movie of the them and It was only when I got home that I identified them as Pacific White-sided Dolphin. It's somewhat unusual for this species to be so slow moving, quiet and in such a small group. At least one may be a different species as the colour and shape of the dorsal fin looks quite different from the others, and I do know there is often a mix of species in a pod. How lucky we are to be having so many different
kinds of marine mammals so frequently present along the shores of Texada this year.
JD.