The next hike will be on Saturday, 26th January.
We meet at the Ballpark in Gillies Bay at 10:00am.
Last week we again had nice weather for hiking and took a route that was a mix of old trails and newer ones.  Parking on Bell Road near First Lake we used our recently restored trail to Mystery Lake and kept going past the lake to the junction where the trail to Thompson Bluffs branches off to the left.  On the right at this point there is an old logging road that heads north and drops down to Thompson Road where we continued north on Thompson Road and then took the next road on the right which eventually ends part way to Balanced Rock Lake.  It's always nice to have a spot with a good view for lunch and we found one a large sloping clearcut facing south.  Balanced Rock Lake was a new location for some of the hikers and we checked out the shoreline on both sides before heading off back to the vehicles  along an old logging road we have not hiked for several years.
My photo shows the cones and needles of one of the world tallest trees which happens to be quite common in and around Gillies Bay.  It's range extends from coastal Washington State all along the coast to the south coast of Alaska. The name comes from the small town of Sitka on the Alaska Panhandle.  The wood is very strong has been used in the past for ships masts and in the two world wars for building planes. In places on Vancouver Island there are a few specimens more than 300ft tall!
JD. 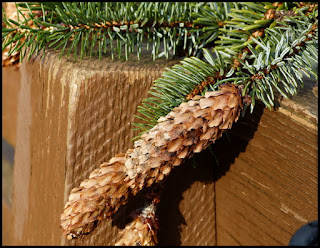 Sitka Spruce, Picea sitchensis. This is a common tree around Gillies Bay, but not seen so often elsewhere on Texada.
Posted by Gillies Bay at 12:08 AM No comments:

Posted by Gillies Bay at 8:25 AM No comments:

The next hike will be on Saturday, 19th January.
We meet at the Ballpark in Gillies Bay at 10:00am.
Last week we drove north towards Van Anda and parked at the old farmhouse on the right. Quite close by is the start of a logging road that winds it's way through the forest and eventually joins with the gas pipeline right of way.  From there its not far to a point where the High Road can be reached and then heading south brings you to the Raven Bay turnoff.  Instead of heading down to the beach for lunch our plan was to locate a new viewpoint on some higher ground and after a fair distance along logging roads we did find a lunch spot with the view in my photo of the week.  The main entrance to Jervis Inlet is in the gap between the mountains on the far shore of Malaspina Strait.
JD. 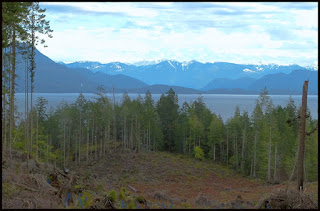 The view east from a recent forest clearcut near Raven Bay. The white tower marks the location of the very old hydro generating station south of Powell River.
Posted by Gillies Bay at 12:17 AM No comments:

The next hike will be on Saturday, 12th January.
We meet at the Ball Park in Gillies Bay at10:00am.
Last week we started out on the hike expecting to have at least some rain, and it was indeed a rather dull and cloudy day, but the air was mild for this time of year and the rain must have been somewhere else.  We drove to the parking place near the top of Pocahontas Bay Rd. and walked to the old fire lookout peak then on to the peak to the north-east that has a large microwave radio reflector panel on steel supports.  This is where we ate lunch and I took this week's photo.  This is a grey or yellowish plant that bears the common name Reindeer Moss.  It grows all over the cooler parts of North America and Europe and is a food for both reindeer and their close relatives the caribou.  Not actually a moss it is in fact a lichen with the scientific name Cladonia rangiferina.
JD. 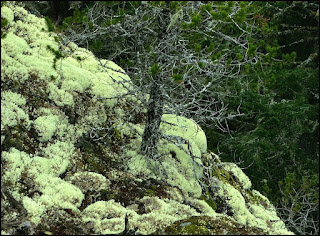 The next hike will be on Saturday, 5th January.
We meet at the Ballpark in Gillies Bay at 10:00am
Last week I was able to go on the hike again after missing several in a row and it proved to be a little bit different to what we had expected. We had had quite a lot of rain in the week before the hike so it really did not occur to us that there might still be some snow on the higher ground not far from Gillies Bay.  However, we found the side road near Bell Farm had a thin coating of snow and decided to park a little before the gravel pit where we usually park when heading for the top of Black Mountain. Weather conditions were really quite good, we soon warmed up and we made quite good progress except that the steeper parts of the trail where it climbs up through mature forest was certainly slippery in places.  We found that the strong south-east wind was bothering us on the highest part of the trail, but the  lunch stop viewpoint was surprisingly calm and after a while the fog cleared away and we were delighted to have the view of the coast mountains that we did not expect when we first started the hike.
JD. 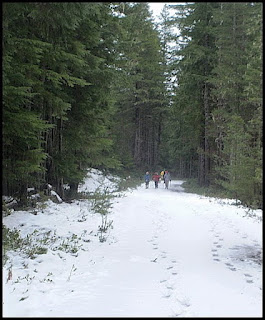 Hiking a snow covered road on the way to Black Mountain.
Posted by Gillies Bay at 11:45 PM No comments: