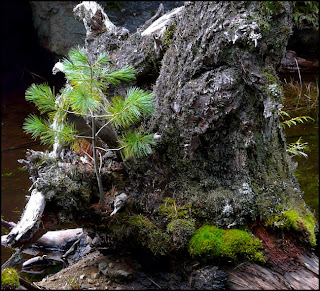 The next hike will be on Saturday, 28th April.
We meet at the Ballpark in Gillies Bay at 10:00am.

On our last weekend hike we were in the central Thompson Road area and had lunch on top of the very steep sided Eagle Mountain. There is a fairly recent logging road that climbs very steeply to the very top and some grassy bluffs on the west side have great views towards Vancouver Island.

Sometimes on our hikes someone will spot some natural feature along the way and mention that it would make a really pretty photograph. The only trouble with that is that capturing the scene with the camera lens can be far from easy. The human eye sees the world in 3D and the brain often hides the background in a way that works in the real world, but not so well with a two dimensional picture. The subject of my photo this week is an upended tree stump that has been nicely decorated by nature. One of the hikers noticed it as we walked past a shallow pool and I have tried to portray the beauty of the moss, the lichen, the bark and the miniature tree in my photo.
JD.
Posted by Gillies Bay at 12:14 AM No comments:

The next hike will be on Saturday, 21st April.
We meet at the Ballpark in Gillies Bay at 10:00am
Last week we had a very pleasant day, mild temperature and calm sunny conditions for our hike.  We decided to drive up onto the high plateau area to the south of Bobs Lake as we were sure the snow which had kept us away for some time would be all gone by now.  We parked not far from Angel Lake and took a side road the short distance to the southern part of Gentian Lake.  This was just to take a quick look at the flooded road which some of us had not seen before and, in my case, had not checked out for several years.  We wondered if it was still a barrier to hiking.  Retracing our steps and after walking south on the main road for a while we sidetracked again to pay a quick visit to the picnic area beside Angel Lake.  Being far too early for lunch we continued south and headed in the direction of the hunters camp beside a large beaver pond where we had recently finished cutting a trail I started quite a few years ago with Sylvia Dunn.  As we crossed a boggy area on the old part of the trail one hiker spotted and caught a good sized frog that was quickly identified as a rare Red-legged Frog.  In Canada this species is only found on Vancouver Island, a small part of the adjacent mainland and a few islands in between. On Texada the species in recent years has only been found from Gillies Bay north to Blubber Bay so it is exciting to find that it also still survives on high ground in the south.  We were lucky that this individual was very docile as they tend to be fast moving and hard to catch and certainly not easy to photograph.  In my photo below it's sitting on the lovely red variety of Sphagnum moss where we found it. You can clearly see the golden eyes that are a distinct feature of this species, but the bright red underside of the legs and belly are hidden.
There is now funding for the conservation of this blue listed native and conservation work and distribution studies have begun and should continue for several years.   It's believed that the species has suffered severe population pressure for many decades from the highly invasive non-native Bullfrog.
JD. 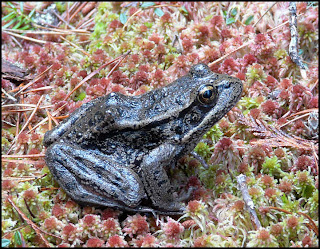 A fine specimen of a dark form of the native Red-legged frog sitting on unusual red Sphagnum moss near Angel Lake.
Posted by Gillies Bay at 11:46 PM No comments:

The next hike will be on Saturday, 13th April.
We meet at the Ballpark in Gillies Bay at 10:00am.
The last couple of weeks I've been busy over on the beaches of east Vancouver Island trying to count and record banded geese, often under far from pleasant weather conditions. In between my beach sessions I try to explore a few off the beaten track places that interest me.  One pleasant walk was along the densely wooded banks of French Creek in Parksville.  The forest floor was almost completely covered by a rich growth of shield fern, but here and there the vivid white flowers of the White Wake-robin brightened the scene.  This species, Trillium grandiflorum, is found both in western North America and over much of the eastern part of the continent from Canada down into the southern states.  I have never seen a specimen growing wild on Texada even though it is quite common in suitable forest areas on Vancouver Island.  In my photo the three leaflets still carry raindrops from a brief shower that made me shelter for a few minutes under a massive old growth red cedar.
JD. 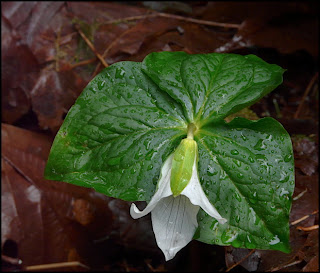 Fresh raindrops on a Trillium close by the banks of French Creek in Parksville, Vancouver Island.
Posted by Gillies Bay at 12:22 AM No comments:

Next Hike from Van Anda to Raven Bay for Beach Barbecue. 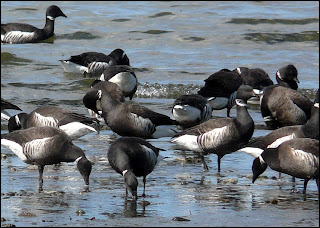 The next hike will be on Saturday, 7th April.
Meet at the Royal Canadian Legion parking in Van Anda at 10:00am.
This is the annual special event day when all hikers, former hikers and significant others get together at Raven Bay to enjoy a very pleasant hour or so with pot luck food and drinks around an open fire.
I am busy with my annual goose chase on the beaches of Vancouver Island trying to count and identify the lovely little sea goose called Black Brant that stop with us for a few weeks every spring on the long journey from their wintering areas in Mexico back to Alaska, Siberia and parts of the Canadian Arctic where they were born.  A few of these sleek birds visit Gillies Bay between February and the end of April, but my photo of them was taken on the shore at Qualicum Beach a couple of days ago.
JD.
Posted by Gillies Bay at 12:00 AM No comments: