The next hike will be on Saturday, 30th October.
We meet at the Ballpark in Gillies Bay at 10:00am
Las week we hiked along Thompson Road for a while but instead of turning to go up onto Thompson Bluffs we continued to the next road juction on the left. This side road climbs up through some thick second growth forest and end on a ridge where my trail to Third Lake and the gasline starts. It needed some cleaning on the first part as the salal has grown in since the last time we worked on it. Lunch was on a wooded ridge with views to the west towards Vancouver Island. This area had a few good mushrooms including some fresh pines.
My photo this week was taken on a recent hike near the top of Twin Peaks. This caterpillar, one of the largest found in our area, becomes an adult after spending the winter in a chrysalis. The front end is the one with the four pairs of red bumps. The adult insect is a very large and beautiful brown moth with four distinct white marks on it's wings.
JD. 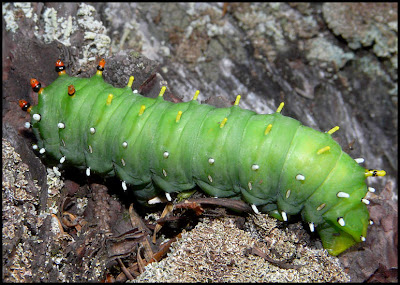 Hyalophora columbia catapillar near the top of Twin Peaks. The large adult moth looks as if it has strayed from the Amazon rainforests.
Posted by Gillies Bay at 11:22 PM No comments:

The next hike will be on Saturday, 23rd October.
We meet at the Ballpark in Gillies Bay at 10:00am.
For the hike last Saturday we drove down the much improved road to Pocahontas Bay and parked near the start of the rough road up to the radio towers on Pocahontas. The day proved to be a good one for mushroom pickers and I even collected a few very large fresh Shaggy Manes. The hike took us off on the first side road to the south and then, climbing steadily up through an extensive and fairly recent clearcut, we eventually reached the lunchspot on a narrow ridge with fine views towards the mainland. In my photo Harwood Island is in the middle with Savary just visible beyond.
JD. 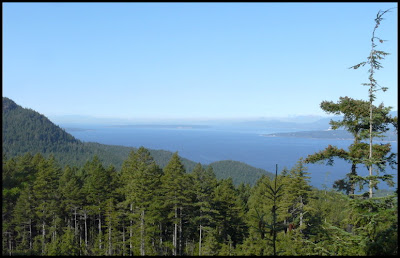 View looking north from above Pocahontas Bay with Grief Point on the mainland on the right. Harwood is the island in the middle.
Posted by Gillies Bay at 10:46 PM No comments:

The next hike will be on Saturday, 16th October.
We meet at the Ballpark in Gillies Bay at 10:00am
Last week we had a damp cloudy and windy day and hiked to the small lake on the high ground to the west of Hydro East Road. It was quite foggy there and eating lunch under the trees was a curious experience. The view out over the lake was cut short by the mist and the distance was shrouded in a white sheet that blended sky and water together. My photo was taken on the day of the mid-week hike which started and ended at the Ballpark in Gillies Bay. When we gathered there at the start, and when we returned in the afternoon the same small small flock of migrating geese were browsing the short green grass. We don't see this species, the Greater White-fronted Goose, very often, but they do seem to be visiting in larger numbers and more frequently than at any time in the last forty years or so. In my picture the adult is the bird on the left with the distinct white band across the front of the head and a juvenile is walking ahead of it on the right. The ones that come down our flyway in the fall would be breeding in Alaska probably and on their way to winter in the Lower Mainland or perhaps as far south as Mexico.
JD 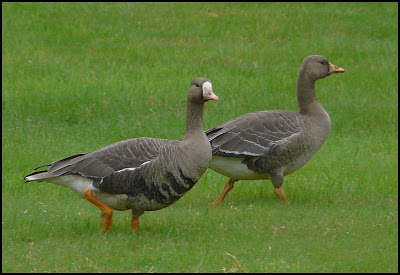 Two Greater White-fronted Geese at the Ballpark in Gillies Bay.
Posted by Gillies Bay at 12:13 AM No comments:

The next hike will be on Saturday, 9th October, 2010.
We meet in Gillies Bay at the Ballpark at 10:00am.
Last week we hiked on Pocahontas Bay road down the hill then past the bay and along the side road that leads to the secluded beach a little to the south along the coast. Curiously a short stretch of the beach had about three dozen of the mostly large Lion's Mane jellies [or jellyfish] stranded on the sand. In my experience they are usually pretty harmless by the time they reach our coastline as the long tentacles on the underside seem to have been lost somehow. In my photo the one on the right is upside down the other too having the smooth surface on top
JD. 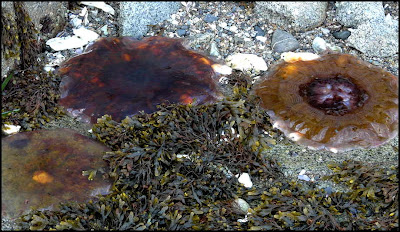 Giant Lion's Mane jellies on the beach near Pocahontas Bay.
Posted by Gillies Bay at 11:31 PM No comments: 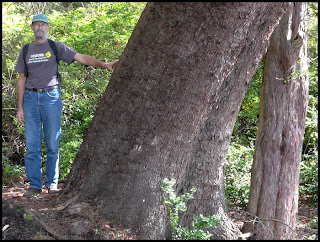 The next hike will be on Saturday, 2nd October.
We meet at the Ballpark in Gillies Bay at 10:00am.

Last week the Saturday turned out to be quite windy, dry, sunny and surprisingly warm. We hiked the Shingle Beach road and had lunch on the grassy bluffs where we sat and watched the strong southeasterly pushing white capped waves towards the north. On the way down we decided to check the situation at the tiny Yewtree Bay that I knew has been used by squatters for the last few years. We found the rustic cabin still there, but in quite a mess with quite a lot of rubbish scattered around the area and no one in residence. Checking out the trail from the cabin to the tiny cove not far to the north we found some new clearings in the forest and some newer side trails. One ended at the top of a low cliff with a nice view, nothing special, but close by we discovered one of the largest Arbutus trees I have seen on Texada and you can see the base of the trunk in my photo. Also quite a surprise was finding right next to the giant yet another Western Yew, a healthy specimen that may well be just as old as the much larger Arbutus.
JD.