The next hike will be on Saturday, 14th January.
We meet at the Ball Park in Gillies Bay at 10:00am.
Sometime last week a large number of sea lions began to gather around the rocks and small islands between Favada Point and Maple Bay on the north-west coast of Texada. For quite a few years now some sea lions have been quite frequent visitors to this area, but this time the numbers have far exceeded earlier totals. Last Saturday we had a wonderful chance to hike along the shoreline and through the forest on some new trails after spending a long time watching these quite amazing marine mammals.
My photo shows part of one group of sea lions resting on the smooth rocks of one of the islands. There are about 90 individuals in my photo while this particular group numbered more than 120 in total. Elsewhere there were smaller groups both in and out of the water, and several hundred all together. Tom has posted many great photos to his Picasa web site:—
http://picasaweb.google.co.uk/texadatom/FavadaPoint#
Many thanks to James Mack for inviting us to visit, and to John and Susan who guided us along the new trails. 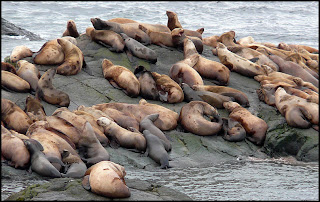 Sea lions on rocks near Favada Point. Both the smaller California and the much larger Steller's sea lion were present.
Posted by Gillies Bay at 12:08 AM